How to Survive Your Freshman Year 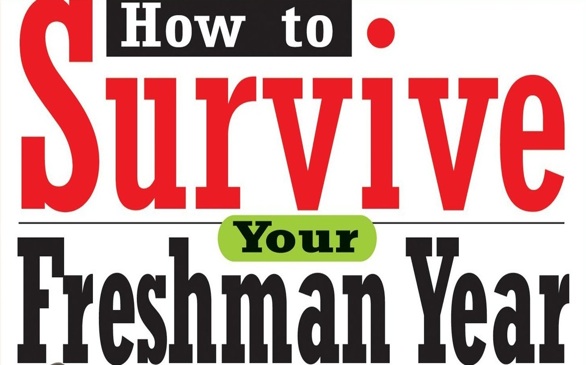 All the things I wish someone had told me before my first year of college!
(Credit: Handout/KRT)

THE FRESHMAN 15 IS MORE LIKE THE FRESHMAN 3.5
The media promotes Freshman 15 as major source of worry for most incoming college students. However, there is no need to fret. What many people do not know is that the Freshman 15 is really a misnomer, because most first-year college students do not gain even close to 15 pounds. In fact, a study from the December 2011 issue of Social Science Quarterly indicates that most freshmen gain somewhere between 2.5 and 3.5 pounds after their first year of school. So, the concern that going off to college will turn string-bean high school students into big fat balloons in just one year is more myth than reality. However, to avoid gaining weight over the college years, it is a good idea to start developing habits for a healthy lifestyle during the freshman year. Part of the reason why first-years gain weight is because they go from a world where they are told what to eat and when to exercise to a world of total dietary and physical freedom. Many go overboard on this newfound freedom by exercising less, sleeping less, drinking too much alcohol, and eating chicken nuggets every night, which would take a toll on anyone’s physique. There are many easy ways to stay on track while still getting a complete first-year experience. For instance, joining a club or intramural sports team is a great way to keep off the Freshman 3.5, while having fun and meeting new people. It also helps to avoid stress eating, late night snacking, and eating while you study. As long as students exercise regularly and remember to put some green things on their plates, gaining weight should not be an extra load of stress for the already stressed-out undergrad.

THE ROOMATE SITUATION ISN’T (USUALLY) A NIGHTMARE
Every incoming college student hears countless horror stories of those atrocious roommates that come home drunk and pee all over your computer, which just so happens to have your 12-page essay saved on it. Without a doubt, the roommate issue is a daunting one. Colleges do their best to match students with compatible roommates, but the nitty-gritty truth is that it’s pretty much a gamble. However, the reason you hear so many horror stories about freshmen roommates is because those are the most interesting ones to tell. Remember, there are also many stories of roommates who turn out to be lifelong friends, the type of people who will be in your wedding party or who will name their kid after you. Everyone goes to college hoping that their roommate will be one of those lifelong friend types, and it can be very disappointing when that does not happen. The most likely expectation is that your roommate will be someone who is just a person you share a room with. College is one of the best and easiest places to find those lifetime friends, so if your roommate does not turn out to be one of them, then other people will be. As long as you and your roommate get along well and have similar sleeping patterns and habits, then that is all you need. However, if you are one of the unlucky ones that has to deal with a urine situation, do not forget to cover your things with plastic sheeting, back up your computer documents to an external hard drive, and apply for a room reassignment.

GO TO THOSE AWKWARD DORM GATHERINGS
The first month of the first year of college is filled with little events, gatherings and mixers that are meant to help freshmen meet each other and make friends. Events like this are uncomfortable, awkward and often have lame themes. They feel somewhat like a blind date that was set up by a friend, where a forced “please like each other” lingers over everyone’s head. However, within all of the pizza parties, dorm games and music jams, you are very likely to find a friend and broaden your social scope. So, as much as you might not want to go to these events, it will in some way prove to be worth the effort. Part of the reason why these gatherings are so awkward is because most people do not like to be the first one to start a conversation. Do not be afraid to approach people and introduce yourself, because eventually someone has got to do it. If you are a shy person, then you can wait for others to approach you –just make sure you are very receptive of them when they do. There will also be people who show up to these events and act above it all. However, as much as everyone tries to act too cool for school, they eventually all want similar things from the college experience: to have fun, to find a passion, and to make friends.

THINGS TO REMEMBER ABOUT DRINKING
Learn the rules of Beer Pong before you go to a fraternity party. Those boys can be so serious about their BP rules and regulations that it is like they are playing an Olympic sport. Furthermore, when it comes to the “Liquor before beer have no fear, beer before liquor never been sicker” rule, there comes a certain point in the night when you drink so much that the “never been sicker” will come no matter if you followed the rule or not. Also, it will help to eat some sort of bland carbohydrate before you go out drinking, because your stomach will be better equipped to handle the alcohol. Drinking on an empty stomach will pretty much guarantee a “never been sicker” situation. Finally, make sure you go out with friends or in a group so that you do not pass out all alone outside the dorm room because you were incapable of using your swipe card to open the dorm-building door.

GET TO KNOW YOUR PROFESSORS
Knowing professors on a more personal level will only benefit the learning experience. Most professors offer office hours so that students can come to them for questions and concerns regarding the lessons, but they are also a good time for a chat with a friendly ear. If there is a particular class or professor that keeps you engaged during lecture, then talking to that professor outside of class will help you build a network in your school. Not to mention, there may be times in the future when you will need a recommendation from a professor, and it is much better to get a recommendation from someone who knows you both as a student and as an individual, rather than from someone who only knows you on paper.

Keep those guidelines in mind, but most importantly, get out there and go for it. Try new things, make mistakes, meet new people from around the world, work hard, play hard, and have fun. Freshman year is about a group of new experiences, and it is what you make it to be, so make it be great. Good luck!