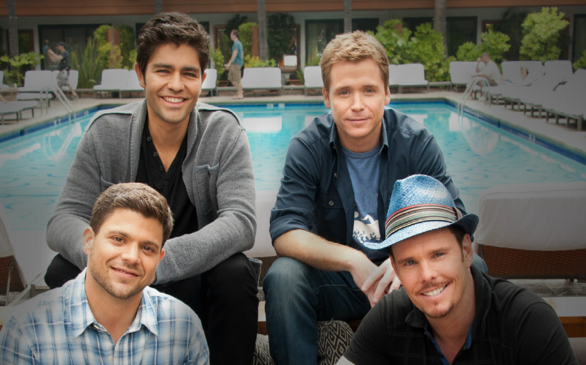 Action!: In Lockout, an ex-government agent (Guy Pearce) wrongly convicted of espionage gets a chance at freedom –if he can rescue the President’s daughter from a deadly riot raging inside a high-tech prison in orbit around the earth. French action legend Luc Besson co-wrote this taut sci-fi action flick.

In the Indonesian slums, a high-rise apartment building acts as a safe house for the city’s worst criminals. Now an elite SWAT team is going in to take down the druglord in charge. But the team becomes trapped on the sixth floor, and has to fight their way through the building of killers in the adrenaline-fueled The Raid: Redemption.

The Idiotbox: Bid farewell to Vince and the gang with the eighth and final season of “Entourage.” This season finds the friends starting to go their own ways: Turtle launches his tequila brand, Drama has landed the role of a lifetime alongside the volatile Andrew Dice Clay, E embraces his dark side to become a true Hollywood agent, and Vince, fresh from rehab, tries to turn his life around.

A Portland detective stumbles onto a secret world behind reality where mythical monsters walk among us in “Grimm:” Season 1. Nick Burkhardt (David Giuntoli) discovers he is descended from a long line of “Grimms,” humanity’s guardians against these fabled creatures. Fans of dark fantasy will eat this up.

Get ready for some Adult Swim insanity with “Squidbillies:” Volume 5. Created by the guys behind “Aqua Unit Patrol Squad” and “The Brak Show,” this is the tale of a family of inbred hillbilly squids. The Dancing Outlaw himself, Jesco White, guest stars!

The Trinity Killer is gone and everyone’s favorite serial killer antihero can go back to being a single father, employee of Miami PD and psychopathic vigilante in “Dexter:” Season 6. But now a new villain, the Doomsday Killer, is playing out the Book of Revelations trying to bring about the Apocalypse.

Stranger Than Fiction: A testament to the power of cinema, Paradise Lost 3 is the latest installment in the 18-year chronicle of the “West Memphis Three,” the teens who were convicted of murder based on their love of heavy metal music.

Graphic art has long been an invaluable weapon in revolutions. This medium, which captures the outrage of social injustice and turns it into something positive, comes to life in Art is…the Permanent Revolution. Masters like Goya, Rembrandt and Picasso are highlighted along with contemporary artists.

One of the true legends of twentieth century music, Bob Marley singlehandedly brought reggae to the world. Oscar-winning director Kevin Macdonald tells the singer’s life story, along with some previously unreleased music and performances in Marley.

Blu Notes: One of the best thrillers ever made, Steven Spielberg’s Jaws still keeps viewers out of the water. It hits Blu-ray newly restored and with a new feature-length documentary.

Stanley Kubrick’s classic Vietnam drama, Full Metal Jacket, celebrates its 25th anniversary with a newly remastered edition, which includes an all-new documentary. With pitch-black humor and heartfelt tragedy, the film follows a group of soldiers from dehumanizing boot camp to the horrors of war.