The Twitters and Tumblrs You Should Be Following Now: Part 2 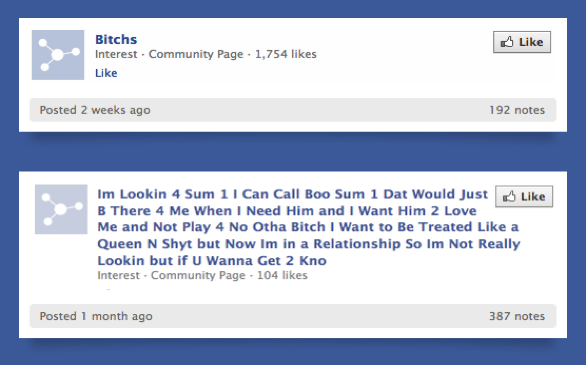 Faceobok sifts through Facebook to find some of the most hilarious groups and interests.
(Credit: Screenshot/faceobok.tumblr.com)

Samuel L. Jackson
@SamuelLJackson
My favorite part about the Olympics this year (seeing USA win gold comes a close second) has been Samuel L. Jackson’s twitter. If you thought you were excited for the Olympics, you were wrong. Samuel L. Jackson was more excited than you. Samuel L. Jackson will always be more excited than you. I’m not sure how he does it, but he’s managed to come back with exclamatory tweets reeking of patriotism, passion, awe and criticism for almost every sport in the Olympics. I’d trust him with the medal count. He’s gotten to be quite knowledgeable about gymnastics (“Uh Oh, Pommel Horse next! Thass like Balance Beam for dudes!”), and his hatred for the sport’s NBC commentator Tim Daggett speaks to me. However, Jackson’s twitter isn’t good only for the Olympics. He’s generally very aware of all the latest news. He sent condolences to the Aurora shooting victims, spoke out during the Trayvon Martin case, and sent out a “drink responsibly!!” PSA the day before “St PADDY’S.” He also refers to Tiger Woods as “TIGA TIGA GOLFINFUQQINWOODS.”

Breaking News
@BreakingNews
With almost 4.5 million followers, Breaking News is easily one of the most trusted news source on Twitter. Collecting news from various media outlets, if it hasn’t been tweeted by Breaking News, it probably isn’t news.

Stumble across these Tumblrs…

Faceobok.tumblr.com
Tumblr is nothing if not a site to make fun of Facebook. This one mostly takes screenshots of actual groups and pages (ex: If I get more than 3 like I will film myself eating a hamberger) on the social network that people have made and other people have joined and liked. Come and weep at humanity with me.

Theburninghouse.com
This tumblr is a blog in which people submit a picture of all the things they would save if their house were burning down. It is an insightful look inside a person, and says so much without saying much at all.

Animalstalkinginallcaps.tumblr.com
ANIMALS TALKING IN ALL CAPS – IT’S EXACTLY WHAT IT SOUNDS LIKE, AND IT’S GREAT.