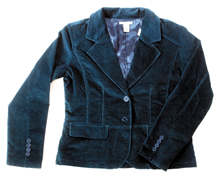 Untitled Document One of fall’s trendiest fabrics, velvet was once reserved for nobility.

Today, this luxurious fabric still conveys a certain amount of opulence. Its jewel-toned colors add polish to any outfit.

Velvet blazers are already showing up in some stores, and colder weather will see velvet blouses, shoes, purses and even menswear.

"We’re seeing women wear velvet for more than just formal occasions," explains Michele Murphy, spokesperson and fashion expert for Mervyns. "It has a sophisticated look, and you can dress up items like denim with velvet."

Velvet is a pile weave fabric that was originally made from pure silk. The material has extra yarn woven in, and the heavy, textured look of velvet is produced when the extra yarn is looped during the weaving process. To make crushed velvet, the fabric is moistened and twisted, usually by a machine, to give it a "crushed" texture.

As popular as velvet is today, wearing it has been fashionable for centuries. Originally velvet was made for royalty and worn during ceremonies as far back as 2000 B.C., when Egyptian royalty draped themselves in the luxury fabric. Other historical records described the kings and queens of Persia, Turkey and India wearing "mukhmal," or velvet.

Europe produced the luxury fabric continuously from the 12th century to the French Revolution, when Napoleon suspended production temporarily. Flappers wore velvet in the 1920s, and performers like Sammy Davis Jr. made pastel velvet suits popular in the ‘70s.

Newer velvets are no longer made from silk but blended with or made entirely from cotton. Velvet blends are usually less expensive and make handling easier because there are fewer chances to permanently crease the fabric.

Fine velvet garments should be dry-cleaned, but cotton velvets are washable.