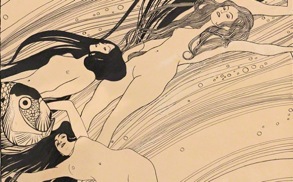 In celebration of the 150th anniversary of Gustav Klimt’s birth, the Albertina Museum in Vienna in association with the J. Paul Getty Museum organized a major loan exhibition at the Getty, which is the first retrospective entirely devoted to the drawings of this great artist. More than 100 drawings (many of which have never been exhibited in North America) are featured in an exhibition that runs now through Sept. 23.

The evolution and development of the phenomenal Viennese artist – who some considered as the father of Viennese modernism – from his earliest work as a traditional painter and academic realist in the mid-1880s to when he became a radical modernist in the early-20th century is tastefully traced throughout the exhibition.

For Klimt, practicing drawing was an everyday business, and all of his paintings were rooted in daily life to convey a realistic atmosphere. Most of his drawing sessions consisted of drawing live female models in nude, which explains the countless naked women featured in his works. In order to arrive at a pure portent of expressiveness and emotions he was completely satisfied with, the perfectionist would make the tiniest adjustments from the model’s facial expressions, hand gestures, to every little nuance when drawing. It was through drawing and working with live models that Klimt developed his signature themes of human suffering, the struggle for happiness and love, and the life cycle from birth to death in such a vivid and realistic manner.

Most may only be familiar with his iconic painting, “The Kiss,” but this exhibition will show you that there are much more to the paintings of this seminal modernist figure than just ornate style (there are around 4,000 of his drawings that survive). In fact, his drawing career can be divided into two parts: Historicism and Symbolism.

At the beginning of the exhibition where the earliest works of Klimt are on display, his creations are mostly drawn in an academic drawing style, with three dimensional and shaded human figures dominating. Numerous of his paintings from those times consist of costumed three-dimensional models re-enacting historical or mythological moments that ultimately advanced their way to dignify the ceilings of numerous government buildings and theaters.

Walking through the exhibition is like going through a journey, discovering Klimt’s life as an artist from the very beginning until the very end, with a peek into the world of his private thoughts through the revealing and evocative content of his paintings.

“Gustav Klimt: The Magic of Line” is an exhibition that you definitely don’t want to miss! Editor of Gustav Klimt: An Aftermath Max Eisler perhaps summed up the artist best when he said, “Klimt the draftsman is a completely independent master and without equal in this field.” This statement is not exaggerated by any means, as the works demonstrated in the exhibition truly lives up to the claim! Be ready to embark on a journey of discovery, and find out more about the master and his work at this unique exhibition.