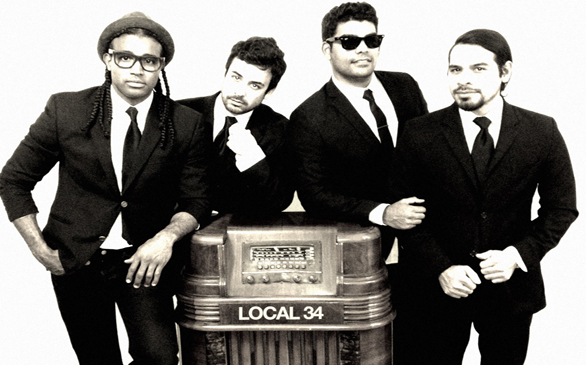 The new sound, as classified by music experts, is gradually penetrating the Latin scene, but it’s happening in a vigorous way. Such is the case with the act Local 34, a four-member music group that found its origin in Miami.

Composed of lead singer and keyboardist Aneudy Lara, Dario Rome (vocals, guitar, trumpet, bass, congas), musical director and guitarist Mauricio Nava, and drummer Alfredo Vado, Local 34 sports an enjoyable fusion of pop, rock and tropical beats. In fact, their diverse nationalities not only musically impacted them, but that also supported their roles as a band flourishing in the new sound.

“There are many styles of music [in Local 34],” Nava says. “Each of us comes from a different place. Due to Lara, we mix in the tropical rhythms like bachata and merengue. With Dario and me, the group plays the gaita and cumbia. And Alfredo has lived in the U.S. a long time, so he is into pop rock. That is what Local 34 is all about.”

The gaita is a traditional genre of Venezuela, while the cumbia is popular in Colombia; both bachata and merengue are Dominican-based. But, according to Nava, their biggest musical influences come from the big Latin acts Juanes (Colombia), and Juan Luis Guerra (Dominican Republic). “From them is where we attain our musical influences,” he says.

Lara, an energetic character with resonating vocals, is Dominican and spent a lot of time in Boston before moving to Miami. Both Rome and Nava are Venezuelan, while Vado’s ethnic background derives out of Nicaragua. Before forming in 2008, Lara placed an advertisement at a local music store depicting his search and desire to form a music act.

“We met him,” Nava says of Lara, who models and acts as well. “We then began to practice and make music.”

The group’s artistic name is catchy, and it really isn’t anything like the typical bands in the industry today.

“When we started, we began rehearsing in a storage – where we had our equipment and rehearsed daily. Until one day when we made a lot of noise musically, we were kicked out. When didn’t have a group name at the time, so we decided to call it Local 34 since the storage’s number was 34,” Nava says regarding the band’s stage name, which was acquired around 2007. In Spanish, storage means local.

Local 34’s album Localizate (Localize Yourself) sports a magnetic tune in “Que Pena” (What A Shame).

“This track is a fusion of merengue and pop,” Nava says, adding they’re targeting the Latin American market with “Que Pena.” “The single is the first off the album. The album has several rhythms, including reggae. The renowned producer Roy Tavare produced one of the tunes. All songs are new and one is a cover.”

There is no denying that Local 34 carries originality - a characteristic leading to success.