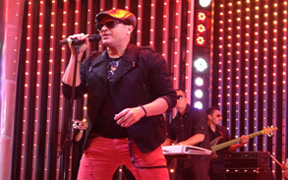 A series of complimentary Latin music shows in Universal City, the Descarga series has brought prominent Latin music singers throughout the summer. And Elvis Crespo and Grupo Treo proved just that during a concert that saw a full house witness both performances.

Energetic as usual, the Puerto Rican singer Elvis Crespo appeared minutes after 8 p.m., and the entire audience received him cheerfully and loudly. Elvis Crespo, dressed with a black jacket, shirt, shoes, hat and shades to go along with red pants, delivered a six-song set that began with "Pintame" (Paint Me).

The upbeat romantic tune was just perfect for an opener. It details a man's wish to have a painter paint the face of a beautiful woman on his heart. With the 1999 album Pintame, he won the American Grammy award for Best Merengue Performance. Elvis Crespo, also a Latin Grammy Award winner, continued with his most recent hit titled "Yo No Soy Un Monstruo" (I Am Not A Monster).

A track that is currently No. 1 at the category of Latin Songs on the Billboard charts, "Yo No Soy Un Monstruo" tackles the infamous ongoing subject of bullying, a matter that Elvis Crespo experienced growing up. According to him, this is why he decided to produce and launch the song. To be clear, the track carries a sincerely positive message that may result in sadness, but Elvis Crespo sure does put in his own flavor while making it an adorably high tempo piece.

Elvis Crespo proceeded with the popular "Tu Sonrisa" (Your Smile), soothing "Nuestra Canción" (Our Song), and globally known "Suavemente" (Softly). For an encore, Elvis Crespo surprised many of us with his selection of "Linda Eh" (She Is Beautiful), which is part of his Grupo Mania days. Nonetheless, the melody succeeded due to its rich rhythm and Elvis Crespo's sensational vocals.

Venezuelan trio Grupo Treo, who vibrantly showed up on stage to collaborate with Elvis Crespo on "Nuestra Canción," served as a pleasant opener. Composed of Rey, Danny Daniel, and Chucho, Grupo Treo is a resplendent young group en route to stardom. The ladies love them. The guys respect them. Just as they should since their music is beyond infectious.

Grupo Treo tend to blend several genres, including reggaeton, rock and roll, romantic balads, and merengue, among others. And they do so rather well because of their enjoyable lyrics and voices, not to leave out their contagious dance moves and ways to romanticize the crowd. Grupo Treo, who left everyone speechless, performed "Pegate" (Stick To Me) and "Amigos Con Derecho" (Friends With Benefits), among others. Their latest album, Pegate, is now available.