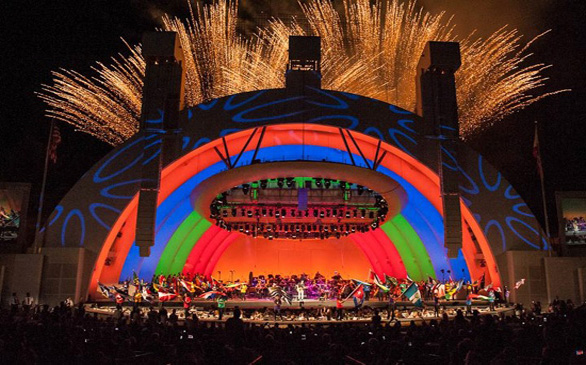 Colombian singer Juanes delivered a thrilling performance near the end of his show Saturday.
(Credit: Facebook/Juanes)

From the beginning until the end of his musically prolific concert, Colombian singer Juanes provided a different glance at his repertoire before a near sold out Hollywood Bowl Saturday night.

Juanes, who also sang Friday at the venue, thrillingly performed tunes from his solo career, which dates back to 2000 although he began with the group Ekhymosis in 1988. Both shows were a part of Gustavo Dudamel's "Americas & Americans" week at the Bowl, which saw performances from Juan Luis Guerra, Ruben Blades, and Placido Domingo, among others.

A singer who occasionally delivers electrifying guitar play, Juanes began the night while singing five pieces with his music band. This featured impeccable displays of "Fíjate Bien" (Take A Good Look), "Camisa Negra" (Black Shirt) and a beyond beautiful cover of reggae legend Bob Marley's "Could You Be Loved." Juanes' version of "Could You Be Loved" got the fans off their seats to dance and sing along with him. This was a remarkable piece to witness and experience live; in all, the crowd was very pleased and amazed.

The resplendent concert continued with a four-song set accompanied by Youth Orchestra LA (YOLA), a Los Angeles Philharmonic program that provides free instruments and music training to students from underserved neighborhoods. This portion included the likes of "Es Por Tí" (It's For You) and "A Dios le Pido" (I ask God), two tracks fashionably delivered in impressive fashion.

More impressive, however, was the on-stage collaboration with the LA Phil for the duration of 12 tunes, starting off with a wonderful "Yerbatero" (Herbalist) from the album P.A.R.C.E. After singing songs like "Y No Regresas" (And You Are Not Coming Back) and "Dificil" (Difficult), Juanes performed another cover, "Rebelión" (Rebellion). This one was expected though, especially because it is a popular tribute to the Colombian salsa legend Joe  Arroyo, who is one of Juanes' musical heroes along with Marley.

This salsa-rock cover injected a lot of energy to the public yet again.

Juanes went on to portray one of the fans' favorites in "Me Enamora" (It Makes Me Fall In Love) before following with "Para Tu Amor" (For Your Love) and "Volcán" (Volcano). The 40-year-old singing gem put on a show to remember with "Odio Por Amor" (Hate Into Love) that included a special choir in the background and a load of particular personnel on stage waving flags while walking in a planned routine.

With that emotional performance of "Odio Por Amor," an encore truly wasn't needed but the noble Juanes came back to the scene and sang "Mala Gente" (Bad Person), an up tempo track that capped off the celebration.