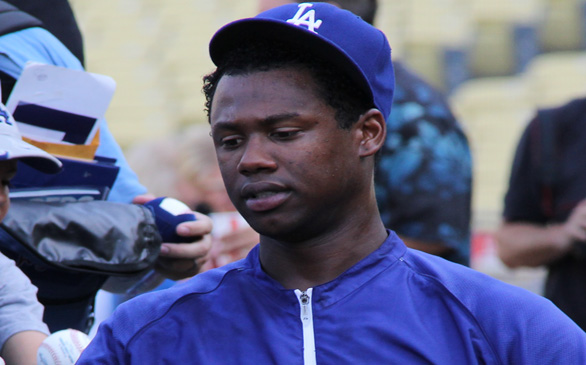 The Dodgers needed stellar pitching. They got it. The Dodgers also needed solid offense. They didn't. Los Angeles lost, 2-1, its opening game of a three-game series against the San Francisco Giants at Dodger Stadium Monday night before 36,878.

With the win, the Giants re-captured control of first place, leading the Dodgers by half a game.

Left-hander starting pitcher Clayton Kershaw was as solid as ever, but Giants' lefty Madison Bumgarner was a little better. Bumgarner threw eight scoreless innings, allowing four hits while striking out 10 Dodger batters. Kershaw, on the other end, surrendered two runs on six hits and fanned 10, too. Both pitchers walked none.

"Both guys had great stuff. I enjoyed watching the game," Giants manager Bruce Bochy told the Associate Press. "Bum had great focus out there and concentration. He's a tremendous talent."

Kershaw allowed the first run in the first inning when Pablo Sandoval hit a sacrifice fly that scored Angel Pagan. Sandoval then added another RBI in the sixth when he plated Pagan yet again, but this time it came on a single to left field. Shane Victorino's throw appeared to be on time for the out, but the home plate umpire called Pagan safe after catcher A.J. Ellis tagged him.

For the night, the only significant piece of offense that the Dodgers received came via infielder Hanley Ramirez, who hit a solo home run to left center field for a whopping 419 feet during the bottom of the ninth. However, it was too little, too late.

After their successful road trip that saw L.A. go 5-2, the Dodgers offense simply disappeared against Bumgarner (14-7).

"You're always in for a battle against these guys," Kershaw said to the Associate Press. "You've got to tip your hat to Bumgarner. He pitched awesome. Two runs ended up being too many, and that's just the way it was."

Bumgarner was very dominant, especially against Matt Kemp who went 0-for-3. But Bumgarner also shut down Andre Ethier and Ramirez as well.

"I think he's been a little impatient, swinging at the ball out of the strike zone a little bit," manager Don Mattingly said regarding Kemp, according to ESPNLosAngeles.com. "They kind of pounded him a little in Pittsburgh and he kind of got a little conscious and that gets you in trouble. He needs to stay with what he does and that's pretty much it. You start looking for a ball in and you're in trouble."

Kershaw, who is now 11-7, went 2-for-2 against Bumgarner. Kershaw's batting average improved to .244 for the season. Luis Cruz finished 2-for-3.

The series continues tonight at 7:10 p.m. For the Dodgers, Joe Blanton will be looking for his first win as a member of the Dodgers. Meanwhile, for the Giants, Tim Lincecum aims to simply gain control of his arm like in years past.