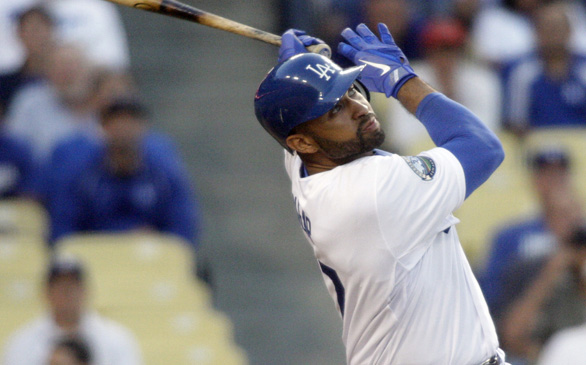 A sold out Dodger Stadium, a struggling Tim Lincecum, and Fernando Valenzuela bobblehead night did not work in favor of the Los Angeles Dodgers Tuesday night. L.A. suffered another loss, 4-1, to the visiting San Francisco Giants before 56,000 fans.

The defeat puts the Dodgers 1.5 games behind the Giants in the National League West standings. Their second straight loss to S.F. squad comes after L.A. finished an impressive road trip at 5-2, which included visits to the Pittsburgh Pirates and Atlanta Braves. It was a trip to remember since it saw the starting and relief pitching perform above par. More importantly, L.A.'s offense awoke and produced significantly.

That, however, has not been the case in their last two games at homes.

The 2012 MVP runner up, Matt Kemp, continues to struggle, however, and that could be a substantial part in the Dodgers inability to be offensively consistent - particularly their last two games at home, where L.A. has scored just twice while surrendering six runs.

With a ninth inning single, Kemp snapped his hitless streak of 0-for-21. Nevertheless, that means he sports one hit in his last 22 at bats. And Andre Ethier finished 0-for-4 with two strikeouts; his woes against left-handed pitching continue, as well.

Despite their surprising lack of offense of late, Joe Blanton's outings on the mound are not placing smiles on anyone's face. In fact, they are a cause for concern. Blanton threw 5.2 innings, allowing four runs on 10 hits and two walks. He also struck out six on 80 pitches; he is now 0-3 with a Dodger uniform.

"Tonight, I felt I threw the ball well," Blanton told reporters after the game. "I felt it was the best I've thrown since I've been here."

In the first inning, Blanton (8-12) gave up two runs and catcher A.J. Ellis remained positive. "It gave us a chance to stay in the game," Ellis said, noting that Blanton limited the Giants' damage by only relinquishing two runs. The Giants went on to score two additional runs in the fourth, pushing their lead to 4-0.

One of L.A.'s best chances of getting runs on the board arrived in the sixth, as Kemp approached the plate hungry and with the bases loaded. Kemp hit a sacrifice fly to right field, scoring Juan Rivera.

"I didn't come through on that one," Kemp said. "We got one run, but it would have been better to hit one over the fence and tie the game." It was the only time the Dodgers scored on two-time Cy Young award winner Lincecum, who has been much less than himself this season.

For the game, Lincecum pitched 5.2 innings while surrendering five hits, one earned run, a walk and four strikeouts. In essence, he shut down the Dodger offense. Dodger infielder Adam Kennedy went 2-for-3.

The series continues tonight at 7:10 p.m., as the Dodgers look to gain ground on the Giants.