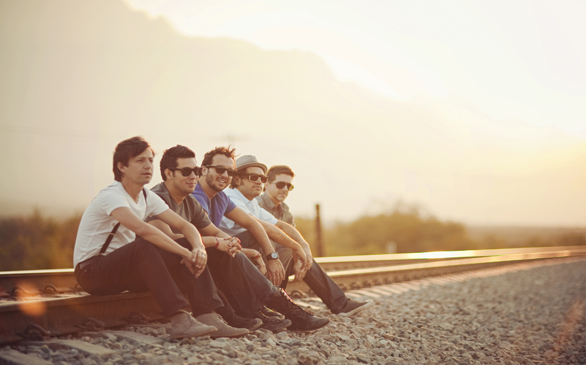 The five-member band Los Claxons are of Mexico.

Since their beginnings in 2002, Mexican pop and alternative rock music group Los Claxons remain persistent and patient. The five-member act chose a path aspiring to the plateau of success.

More than anything else, Los Claxons' patience in the industry has paid off well. The group's four albums prove that, particularly their efforts in their latest work titled Camino A Encontrarte (Road To Find You). It has 13 total pieces, including a bonus track.

Camino A Encontrarte placed No. 1 in iTunes Mexico for more than a month. The singles "Este Mundo Sin Ti" (This World Without You) and "Ahí Estaré" (I'll Be There), a piece talking about a person's support to another, have listed in the national radio Top 10 waves. Interestingly enough, "Ahí Estaré" conveys Los Claxons' brilliance musically and within their genre, respectively.

Los Claxons' bassist and guitarist Pablo Gonzalez Sarre acknowledges how Camino A Encontrarte began. "The process of making the album took over three months," he says. "It was a disc born after the 2010 Latin Grammys."

In 2010, Los Claxons received an honorable Latin Grammy nomination for Best Album in Pop as a duo or group. Although they didn't win, the fact of even being mentioned was a thrill - especially for Gonzalez.

"We didn't expect that. It was a big surprise," he says. "We found out through a friend who called and told us. At first, we thought it was a joke."

"The name doesn't have much science to it," Gonzalez says. "We carried a different band name at first, but we saw that another act registered it first. At one point while on the road, we saw a large truck with the letters 'claxons.' We decided to call ourselves Los Claxons."

Established in Monterrey, Los Claxons have been able to share many likes together. As a matter of fact, their similarities and musical tastes lead to their creativity in music. More or less, it's become a natural manner for them to produce projects, such as Sin Ganga (Without Bargain, 2006), En Primera (In First, 2007) and Los Claxons (2010).

"We make music without even thinking" Gonzalez confesses, noting the group's capacity to formulate tunes while combining each of the five members' flavors.

For Los Claxons, a compelling moment appeared in 2008 while in Mexico. The acclaimed American pop-rock band Maroon 5 toured their native land, and they were asked to be the opening act in cities like Mexico City, Monterrey and Guadalajara. This turned out to be quite the memorable experience for Los Claxons.

"This was very cool," Gonzalez says. "We shared the stage with a group that we admire a lot, and it happened in front of big crowds. In Guadalajara we received a great response from the audience."

Armed with a lot of talented repertoire, Los Claxons are about to embark on a tour that features performances in Mexico, Canada and the U.S., including a Los Angeles show during September at Club Los Globos.

Fans will witness that talent and more out of Los Claxons, who have indeed blossomed through the years when patience was most needed.

"People need to have patience," Gonzalez points out as an essential ingredient to taking on a music career. "It takes patience."