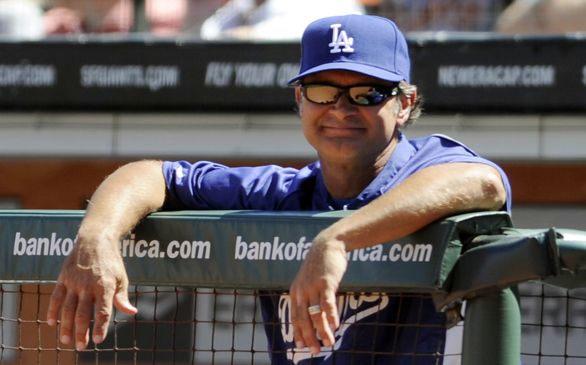 After experiencing a three-game sweep to the visiting San Francisco Giants in a 8-4 loss Wednesday night, Dodger manager Don Mattingly remained optimistic about the team's chances going forward this season and making a push to the postseason.

"The season for us starts Friday," Mattingly said to reporters, noting that L.A. is not giving up.

Quite frankly, that is exactly what the organization needs: positive thinking.

But the Los Angeles Dodgers now find themselves 2.5 games behind the Giants in the National League West standings and their offense has surprisingly disappeared.

Also, L.A.'s starting pitchers were unable to shut down San Francisco's offense in the first inning. The Giants scored in each of the three games during the top of the first, which produced set backs for L.A. - they couldn't manage come from behind wins.

"It was one of those series where it just didn't seem like anything went our way," Mattingly said.

Capuano attempted to finish the sixth and after facing three batters, he gave up an additional three runs. The Giants gained a 6-0 edge at this point with a solid Matt Cain pitching for them. Cain threw seven innings while surrendering seven hits, one run and striking out five.

On a positive note, infielder Luis Cruz keeps making an argument to become an everyday player. Cruz went 2-for-4 with two RBI. He is now batting an average of .294.

Additionally, Rubby De La Rosa return to the mound after a brief stint in the minors - part of his rehab after undergoing reconstructive elbow surgery over a year ago. De La Rosa will be utilized as a reliever for the rest of this campaign.

The Dodgers do play the Giants six more times. Those games could very well determine the division winner.