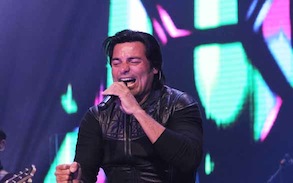 Chayanne was part of Gigant3s tour, which made a stop at Honda Center.
(Credit: Luis Sanchez)

An enormous night of Latin music made a stop at the Honda Center in Anaheim Friday night, which saw the much-awaited Gigant3s tour finally arrive. It featured Marc Anthony, Chayanne and Marco Antonio Solís.

Fifteen minutes after (8:15 p.m.) the announced scheduled time, Puerto Rican pop singer Chayanne made his appearance on stage. Dressed entirely in black, the charismatic and smiling Chayanne opened his set with "Boom," an up tempo tune just perfect for his opener. Chayanne then followed with many romantic ballads in the likes of "Lo Dejaria Todo" (I'll Leave It All), "Tu Te Vas" (You're Leaving) and "Me Enamore De Ti" (I Fell In Love With You).

As always, Chayanne proved to be a true dancer and singer while performing his recent and classic hits. In between pieces, he managed to provide the audience with danceable tracks. "Lola" was very successful and "Torero" instantly sparked loud cheers and applauses. His encore "Provocame" (Provoke Me), arguably his most popular song globally, left fans speecheless and wanting more.

To some surprise, Puerto Rican salsa sensation Marc Anthony followed Chayanne's performance seconds after it finished. Also dressed in all black attire (classy suit), Anthony delivered a dancing classic from the start in "Valio La Pena" (It Was Worth It). The infectious melody got the crowd roaring, jumping and dancing - essentially off of their seats for over six minutes. "Y Hubo Alguien" (And There Was Someone) continued before "Vivir Lo Nuestro" (Let's Live Ours) and "No Hay Nadie Como Ella" (No One Like Her), which featured Chayanne on an enjoyable duo. Interestingly enough, Chayanne could easily make the switch from pop to salsa. He is solid at both genres, among others, and truly deserves a lot of recognition at that. And it could be accounted to his natural talent as a singer, but, more importantly, as a performer.

Anthony, known for his incomparable voice, also portrayed immense energy while singing, but mostly when dancing. He really is quite the crowd pleaser in all areas of his individual performances. Anthony went on to sing a cover from salsa legend Hector Lavoe in "Mi Gente" (My People) before leaving his set with "Tu Amor Me Hace Bien" (Your Love is Good To Me).

A true legend of Latin music all over the world, Marco Antonio Solís highlighted the show with a 13-piece set that included new songs, popular hits, and his classic melodies from his days with the Mexican band Los Bukis. Dressed in a black suit and white shirt, Solís began his performance with a likeable "No Puedo Olvidarla" (I Can't Forget About Her).

Solís continued with several romantic tunes, such as "Mi Eterno Amor" (My Eternal Love), "Mi Mayor Necesida" (My Biggest Necessity) and "A Donde Vas" (Where Are You Going). But an epic moment stage happened to be Anthony's surprise in singing a duo with Solís with "Si No Tu Hubieras Ido" (If You Hadn't Left). This instance provided a moment of reflection to the fans, who simply adore the collaboration.

After Solís sang "Mas Que Tu Amigo" (More Than A Friend) and "Tu Carcel" (Your Prison), the three came out to perform together in the end. All together, the trio displayed one song from each of their music catalogues. Anthony handed "Dimelo" (I Need To Know), Solís provided "Donde Esta Mi Primavera" (Where Is My Spring) and Chayanne produced "Fiesta En America" (Party In America).

The Gigant3s show with the trio truly was a blessed night musically.