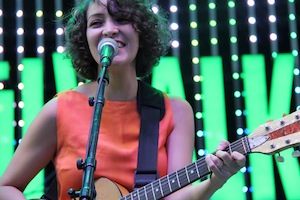 For the series finale, Descarga could not have thought of a better musical line up than to honor the present crowd with Gaby Moreno, Leslie Grace, Eli Jas and a guest appearance by Mexican actor Rafael Amaya.

Guatemala-born, Los Angeles-based Gaby Moreno continued with a six-song set. The gorgeous Moreno, 30, sings both in Spanish and English; she does it beautifully. She sports jazz, soul and blues in her repertoire. Led by her touching lyrics, the singer-songwriter (dressed in a luminous orange dress) initiated her set with "Ave Que Emigra" (Migrating Bird). The emotional, but upbeat tune includes a lovely soothing guitar from Moreno. "Ave Que Emigra" is on Moreno's album Postales (Postcards), which releases Tuesday, Sept. 4.

Postales is Moreno's first disc release with her new label Metamorfosis (Metamorphosis), which was founded by the acclaimed Guatemalan singer-songwriter Ricardo Arjona. During her presentation, Moreno went on to showcase five additional pieces, including "Que Voy Hacer?" (What Am I Going To Do).

To finalize the concert, the Dominican-American, Miami-based R&B, bachata sensation Leslie Grace performed a three-tune set that started with "Day One." This Spanglish bachata melody set the mood for the other two tracks. Dressed in a dark red top and black skirt, shorts-like attire, Grace proved to be the hype that has everyone talking of her.

According to Grace herself, who also performed at the H2O Music Festival Saturday, she did not want to leave L.A. She cited a fun outing while visiting the city for the very first time, adding that she had an awesome journey eating the local food and doing some shopping.

In all, the sixth annual edition of the biggest free Latin music summer concert series in Los Angeles produced a memorable night. Can 2013 be here already?