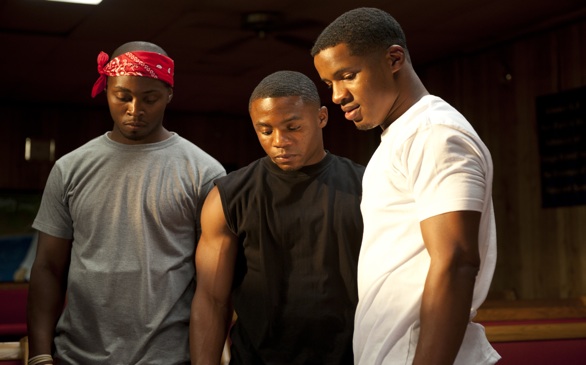 The film takes place in the Red Hook Projects of Brooklyn as it follows 13-year-old Silas Royale, aka Flik (Jules Brown). For reasons unknown, his mother drops him off to stay the summer with his religious grandfather, Da Good Bishop Enoch Rouse (Clark Peters - The Wire and “Treme”). Having never met his grandfather before, Flik finds himself in a new world as culture shock ensues. This leaves Flik longing for his prep school friends and middle-class lifestyle in Atlanta.

Flik begins a unique friendship with a neighborhood girl named Chazz (played by newcomer Toni Lysaith), whose mother is also a part of Rouse’s church. He has to learn to navigate in this new world with an extremely religious and conservative grandfather and unimaginable dangers lurking. Spending summer days at the Lil Peace of Heaven Baptist Church is jarring to the young man who had no rules with his mother.

Even though it is labeled as a coming-of-age film, that doesn’t feel like the right fit. The film focuses on the new relationship between Flik and his grandfather; however, a little too much time is spent on Bishop Enoch Rouse and his church. The mundane activities of running a church are unnecessary, and the sermons tend to feel a little too long.

Lee also uses his tradition of incorporating music as a supporting storytelling element throughout most of the film. Lee and Bruce Hornsby collaborated on the soundtrack, but it can be cumbersome at times as it tries to dictate the mood.

The performances in the film range from underwhelming to excellent. The two young leads are first-time actors, and it sometimes shows. The young girl tended to be a little over-the-top while the young boy felt flat at times. At one point in the film, there comes a revelation that changes the entire tone of Red Hook when actor Colman Domingo delivers a rousing performance. This scene shouldn’t be missed.

Since Lee financed this film solely out of his own pocket, he does bring you back to honest filmmaking without all the gimmicks of special effects and 3D. However, the storyline could be tighter without so many social issues competing for attention in one film.

It’s nice to see Lee head back to his roots and cast first-time actors and mix them with seasoned ones. Just have the patience to hang on through the sometimes tedious story.