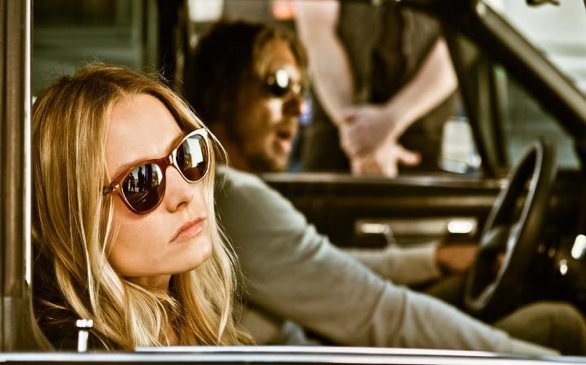 It’s all about the cars and the chicks, man. In any good action movie, that’s what it comes down to: moving vehicles and bodacious babes. What kind of cars, you may ask? Technically, I couldn’t tell you the difference between a Ford Mustang and a Chevy Tahoe, so you’ve got me there. But both have one commonality – boys can’t get enough of either, so much so that Dax Sheppard (comedian, actor, writer and director) has made an homage to the two loves of his life in his upcoming action-comedy film.

Hit & Run (written and directed by Sheppard) also stars the funny man as Charles Bronson, an alias he gave himself when he entered the witness protection program. Life is blissful with fiancé Annie (played by real-life fiancé Kristen Bell) living in obscure small-town America, only having to deal with the occasional slapstick visit by Randy, the federal marshal (Tom Arnold) assigned to his case.

However, Annie is offered a once-in-a-lifetime opportunity that just so happens to be hundreds of miles outside of the small Podunk town where they’ve made a life. Risking his safety, Charlie insists on taking Annie on a road trip to Los Angeles. As a requirement for all good car chase movies – Charlie and Annie need to have someone chasing them. This time, it's Annie’s overly sensitive ex-boyfriend (Michael Rosenbaum) who starts the drama by giving Charlie's whereabouts to his former friends: a gang of bandits whom he sent to jail and from whom he’s been hiding ever since!

The gangsters are led by Bradley Cooper with a bad case of the dreadlocks, which doesn’t sound quite like the stuff of nightmares, but he does a pretty convincing job of being threatening nonetheless. Charlie must outdrive the bad guys to deliver his woman to her interview on time.

Hit & Run may not be the most stylized car chase film of the past 12 months (remember Drive?), but it sure as hell is stylish, taking the V-shaped brows and tight, concerned lips out of the chase and replacing them with a haphazardly firing gun and rapid-fire dialogue.

Sheppard’s stroke of genius in this film, without giving it completely away, involves a spinning car, the slow motion effect and a classic song from a children’s musical. I laughed my socks off; it’s one of the best scenes I’ve seen in a long while. True to its title, this film hits with laughs and keeps you from running out screaming because, excuse the cliché, it’s a ride you don’t want to miss.

Hit & Run is in select theaters.