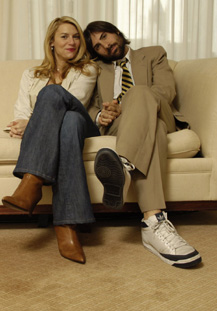 Untitled Document Plenty of movies tell us how exciting and giddy love is. Shopgirl shows how strange and fuzzy it can be.

Shopgirl is a quiet gem that reveals its themes so slowly and subtly, it may not be until after it’s over that it occurs to you what just happened. The characters don’t stumble on major revelations – in fact, the central romance is not a Big Love for either of the characters involved – and the movie never tells us how to feel. Instead, it assumes we’ll engage enough with the characters to figure out how we feel about them.

Mirabelle (Claire Danes, acting with an ache so deep she’s practically transparent) is the shopgirl, a bright, creative woman who barely makes a living selling evening gloves, a luxury product so useless that even the people who can afford them no longer buy them. Mirabelle is lonely, and Shopgirl is a movie that suggests loneliness is a disease that is sometimes curable and sometimes not.

Two people who enter Mirabelle’s life suggest those possibilities. Jeremy (Jason Schwartzman) is a goofball who barely has the attention span to remember he’s on a date with Mirabelle (Hey, Jason: Steve Zahn called and said it’s OK for you to borrow his hyperactive performance because you’re good at it, too). Ray (Steve Martin, who wrote the novella on which Shopgirl is based) is elegant, aloof and practiced at keeping other people at arm’s length.

Like the book, the movie is precise, spare, witty. The decor in each character’s home, for instance, is revealing. The camera usually observes them from a distance, so the rare close-ups feel naked and intrusive.

Because it is so specific in every detail, it’s clear we’re not supposed to generalize. Shopgirl is not saying that May/December relationships are a bad idea, but there are hints the relationship between Ray and Mirabelle is, for reasons having nothing to do with age.

With one devastating exception, the people in Shopgirl are afraid to use words like "love." Instead, they sidle up to love, trying to catch it unawares. In one scene, Mirabelle’s friends tell her she can find out how Ray feels about her by suddenly calling him "sweetheart" and seeing how he reacts. Most movies would cut immediately to Mirabelle doing just that, but Shopgirl doesn’t. It takes its time, and the way her friends’ advice plays out is like everything else in this movie: Lovely, unexpected and right.