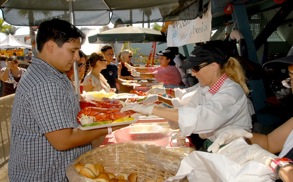 It is not very often that Southern Californians get to enjoy fresh Maine lobster for a meal; however, the opportunity to chow down on this delicacy will arise in early September at the Rainbow Lagoon in Long Beach. That’s right. From September 7-9, So-Cal locals should head over to the beach because “the lobsters are coming!”

The 16th Annual 2012 Original Lobster Festival has become a cherished tradition in the surrounding community and is the largest lobster festival outside of Maine. It gives guests a chance to watch a master chef cook tons of lobster in the world’s largest cooker. More importantly, it allows people to gobble some of the tastiest lobster in the world.

Not a lobster fan? There are plenty of other food options to choose from in the giant food court where Jamaican, Chinese, Thai, Barbeque and other food genres can be found. Keep the party rolling with beer, wine and cocktails from the Beach Bars, where one can find a “Screaming Lobster” cocktail and other bar classics like a Margarita. Without a doubt, the event will keep everyone full and satisfied with the wide array of mouth-watering cuisine and yummy beverages.

However, this event is not just a party for the taste buds. On Friday, get into the groove with Nathan Owens Motown and Soul Revue who will play from 7 p.m. until closing, giving festival-goers a night filled with dancing and partying.

Then, make sure to put on some bell-bottoms or a side ponytail for the groovy concert on Saturday headlined by Decades, a band that plays hits from the 70s and 80s. This band will be adorned in the proper ‘70s and ‘80s garb and will even perform famous choreography from these eras. It is a blast from the past that dancing queens will not want to miss. Other dancing options include salsa, swing and western music that will be played near the two dance floors earlier in the day.

The festival is also a great place to watch the biggest sports games of the day. Instead of staying home, guests can watch the best games on the festival’s TV wall while enjoying a tender bite of lobster and an ice-cold beer.

If that is not enough, there are also other activities that include a children’s stage, where the younger ones can go to join in on the lobster fun. Also, for the lucky people out there, the event will also host a raffle where one can win a Char-Broil Classic Stainless Steel 5-Burner Grill to keep the culinary fun going into winter.

Overall, the festival will be a great time to spend with friends, family and other lobster lovers. With great food, awesome cocktails, live music and lots and lots of lobster, where else would one want to be?

The 16th Annual 2012 Original Lobster Festival will be taking place September 7-9 at the Rainbow Lagoon in Long Beach at 300 Ocean Blvd., Long Beach, CA 90802. Tickets are available only until September 6 and start at $13. For more information and to purchase tickets, visit http://www.originallobsterfestival.com.