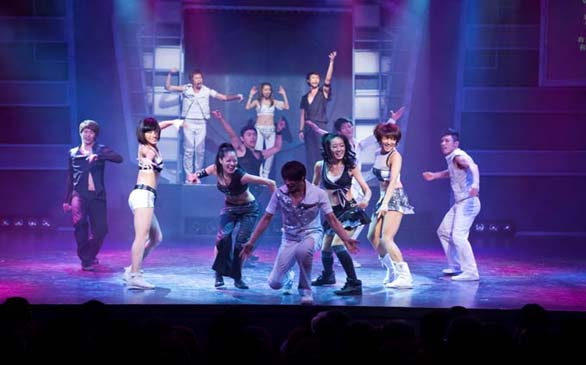 Some of the performers from the dance musical.

Not very often does the diverse population of Los Angeles gets to experience a unique and thrilling entertainment show evolving in Asia. Now is the time to witness such a treat on stage with an uplifting, yet vigorous piece.

A Korean dance musical, “Sachoom” is set to make its debut on U.S. soil, arriving to the L.A. area Sept. 8 (Ford Amphitheatre) on behalf of the Korean Cultural Center LA (KCCLA) and Korea Tourism Organization LA.

"I think people will recognize Korea has a lot of unique talent that stems from something called Hallyu," says Rick Phillips, spokesperson for the KCCLA. Hallyu, which means wave, is a term used for the spreading of Kpop and Korean culture to other countries. "In the last 10 years, there's been a very great surge of success in Korean entertainment mixing traditional and modern culture together in music and dance performances."

"Sachoom" carries a wonderful symbol. In essence, the term sachoom means, "dance when you are in love." It's just perfect for this type of musical, where we see dancers dancing and doing what they love. Phillips gives his input on "Sachoom."

"Actually, if you love to dance, do it," Phillips says of the meaning behind sachoom. "Really, it's a short version of love - dance."

Since 2004, this piece has been showcased throughout the world, and it finally comes to the second most important city in America. To date, over 2,000 performances within Asia, Russia and England have been delivered. And all have been successful thus far.

"Sachoom" is an innovative set, which is highlighted by its originality and diversity based not only on the music, but the dance involved, as well. Korean executive director Choi Kwang Il acknowledges the idea of targeting several audiences, not just one.

"We wanted to find a way for the audience to understand the story and enjoy themselves regardless of time, space and nationality," Kwang Il stated in a prepared statement. "Therefore, we chose dance and movements to be the language of the musical."

Displaying the coming of age story of three brothers (Jun, Sun and Bin), “Sachoom” sports a nonverbal and all dance routine featuring fusions of hip-hop, jazz, break dancing and dynamic music while including contemporary dance. In "Sachoom," motion really is the storyline.

"Sachoom" also carries resplendent visual images along with the electrifying music, while it conveys the intriguing plot. Throughout this reinvigorating musical, the performers' passionate demeanor while performing will sure instill energy and its contagious dance routines as it connects with all nationalities and ages.

"I hope people come out and really recognize Korea as being a great country with a wonderful culture that offers a lot to the world," Phillips says.