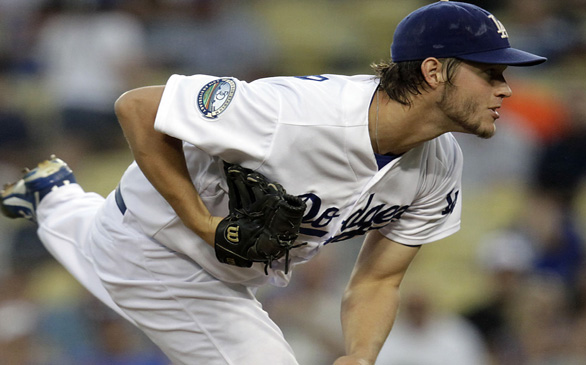 It's starting to look more than blue. The Los Angeles Dodgers dropped their series opener against the Arizona Diamondbacks, 2-0, on a Thursday night that featured a Vin Scully bobblehead giveaway before a sold out Dodger Stadium crowd.

The bobblehead, the energy, the emotional evening, and the optimism going into the game disappeared after the Dodgers' seventh-straight defeat to the Diamondbacks. A fourth inning two-run home run by Chris Young off ace Clayton Kershaw (12-8) put Arizona up 2-0, and that was all it took for the win.

Kershaw, who lasted six innings while allowing the two runs on nine hits, three walks and fanning nine, wasn't happy with his performance. "It's my fault. If we don't get runs, I don't give up any either," he said.

But where was the offense? The Dodgers only managed to collect five hits, and two of those came at the bottom of the ninth in back-to-back singles from Adrian Gonzalez and Hanley Ramirez. Eventually, with a runner on third and first, respectively, and one out, the Dodgers couldn't score.

Dodgers manager Don Mattingly held a crucial team meeting after the team's loss to Arizona. In the meeting, which took about 15 minutes, Mattingly made sure the players know of what's currently taking place. "I just told them about where we are and where we want to go. Making sure the team is aware of the urgency of the situation," he told reporters. With the loss, the Dodgers fell 4.5 games behind the San Francisco Giants in the National League West.

L.A. has 30 games left in the season, including six with the Giants.

Right hander Aaron Harang takes the mound tonight for the Dodgers. At 9-8 with an ERA of 3.70, Harang is looking to stop the bleeding against the D-Backs. Harang sports a 2-1 mark in his last three outings, with wins on the road over the Pittsburgh Pirates (Aug. 13) and Atlanta Braves (Aug. 18).

On Sunday, Sept. 2, another set of Viva Los Dodgers will be presented at parking lot 6. Viva Los Dodgers is a season-long initiative celebrating Latino culture in L.A. that features a family-friendly pregame festival two hours prior to each Sunday home game. This week's artists include Ritmo Machine and Mexico Azteca Ballet. With a ticket to the Dodgers/Diamondbacks game at 1:10 p.m., admission is free to the festivities.