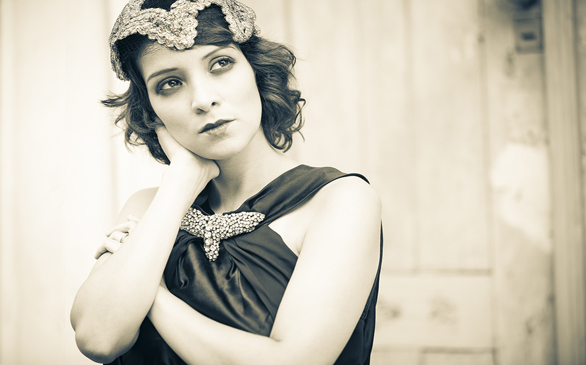 Gaby Moreno, who resides in Los Angeles, was born and raised in Guatemala.
(Credit: Courtesy of Metamorfosis)

She’s failed to picture herself practicing another profession. She’s triumphed as the rising star she is and deserves to be. But if it weren’t for her dream career in music, she’d be working with animals.

“It would have to be something involving animals,” Moreno confesses with an adorable smile. “I love animals, especially dogs.”

The 30-year-old Moreno, who resides in Los Angeles, has experienced a well-traveled journey as an artist throughout the years. At the age of nine, Moreno’s passion for music guided the way to her current path – exercising what she loves: music.

By age 18, she left behind her native Guatemala, a nation that saw her grow not only as a kid and teenager, but in values and education, too. Like any noble human being, she carries her family everywhere she goes. She constantly misses them.

“Being with my family,” she says, adding that she’s very close to her relatives. “That’s what I miss the most of my country.”

In Postales (Postcards), Moreno presents an undoubtedly captivating disc where she solely wrote eight of the 12 total songs. “I attempted to look for a word that shuts down a feeling of nostalgia,” she says of the title selection. “…On top of that, every song is just like a postcard…each of them is different from one another.” Postales was completed in Brooklyn during February.

The first single "Ave Que Emigra" (Migrating Bird) provides evidence to the importance of her land. “Mi Guate nunca la olvido. La llevo siempre conmigo,” she sings, which translates to “I never forget my Guatemala. I carried her always with me.” The sporadically up-tempo melody sports an emotional message, one that Moreno proudly acknowledges.

“It talks about the story of how I left my country in search of my dream to be involved with music,” Moreno says.

Interestingly enough, Postales is Moreno’s first production in her native tongue after formulating Still the Unknown (2009), Illustrated Songs (2011) and the EP A Good Old Christmastime (2010). In her entire repertoire, the roots of blues, jazz, and soul are exclusively prominent – including the latest record. Arjona, who wrote the tune “Blues De Mar” (Blues of Sea) on Postales, gave her the freedom to do whatever she wanted to do musically.

“He tells me to just follow my heart,” Moreno answers when asked if Arjona has given her any particular advice.

And that’s what she’s done. Since her youth, Moreno had aspired to re-locate within the U.S. while professionally singing and touring. She’s achieved her dream. More importantly, she’s living her dream the way she pictured it.