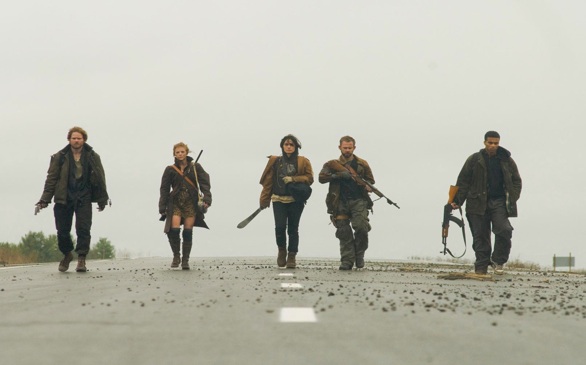 The Day follows five survivors on their journey through a post-apocalyptic world.
(Credit: Facebook/The Day, the movie)

A tale of survivors in a post-apocalyptic future seeking food, shelter and refuge has been told several times before, but what The Day lacks in originality, it makes up with suspense.

The plot revolves around a group of survivors seeking refuge after a war destroyed civilization and most of life on earth. Lost, starving and exhausted, the survivors find shelter in a seemingly safe abandoned house. However, while searching for food and resources, they set off a trap signaling their ruthless predators who are lying in wait to begin their deadly attack.  With food and ammunition dwindling, no place left to run, and tempers flaring, the survivors realize they must do whatever it takes to stay alive.

There is a sense of immediacy and tension right from the start of this movie. When the film opens, we meet the group of disheveled, malnourished and sickly survivors, armed with shotguns, axes and machetes wandering the back roads of a ravaged landscape.  With great pacing by director Douglas Aarniokoski, who releases few details at a time, we learn predators killed seven members of the group. This leaves the motley crew of five: leader Dominic Monaghan, Shawn Ashmore, Ashley Bell, Cory Hardrict and Shannyn Sossamon.

The tension increases after they discover an abandoned derelict house and make an unwise decision to stay, and the next hour is all about the desperation of survival and the terror of a world suddenly gone hostile and predatory. The strains of panic and helplessness twist the tensions of the group to a breaking point and what the characters go through within the course of one day, as the story further develops, is both physically and emotionally exhausting. Nothing is what is seems once it all comes to light that a member of the group is cavorting with the enemy.

Filmed predominantly in black and white with a few flashes of color reserved for flashback scenes, The Day is a terrifying look at a post-apocalyptic future. Throats are cut, slit and stabbed and human flesh is carved out and eaten, so the bloody carnage is gory and gruesome enough to turn your belly-bile green.
Shocks come from the way Aarniokoski presents situations where we think we know what’s next, an then he pulls out the rug from underneath.

Written by Luke Passmore, the movie is strong on suspense and style, but suffers from poor musical scoring and credibility. The fact that it’s set in the future, one would expect the use of more advanced gadgetry, adding the war explanation seems un-flushed.

Still, it’s a taunt thriller with more horror than heart, and although it isn’t unique from other films in that sci-fi/horror genre, it is an edgy suspense movie, which makes it all the more effective.

The Day is in select theaters.