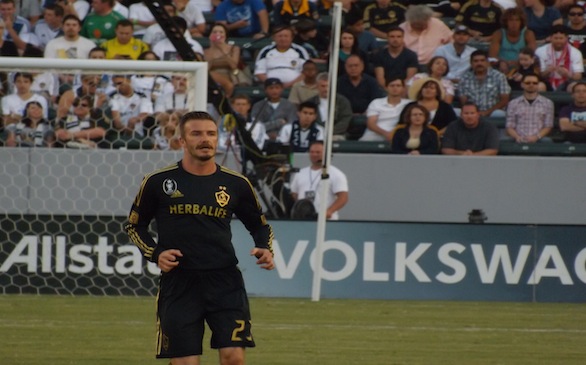 Midfielder David Beckham scored in the second half against the Whitecaps.
(Credit: Marvin Vasquez)

Goals by Juninho and David Beckham in separate halves lifted the Los Angeles Galaxy over the Vancouver Whitecaps, 2-0, Saturday night at The Home Depot Center in Carson before 20,168.

"I thought maybe we were a little sluggish in the first half. I think you got to give Vancouver a lot of credit, they really threw a lot into the first half and closed us down, especially in the middle third," Galaxy head coach Bruce Arena said during a press conference after the match.

The win improved the Galaxy to 13-11-4 on the season for 43 points. Interestingly enough, L.A. is now six points ahead of Vancouver, who are in fifth place with 37 points. Therefore, the victory truly counted twice as much.

“It was something we spoke about before the game that we needed a good performance. We’ve definitely played better this season, but I think it was a big win. We needed to win this game tonight," Beckham said. "Obviously they were coming close to us, three points behind us and it was a big one for us. We’re happy with the win. At times we could have played better, but overall we’ve got to be happy with the win.”

Brazilian midfielder Juninho, who has been playing superbly of late, collected his fifth goal of the year in the 40th minute. Both Irish striker Robbie Keane and newcomer Hector Jimenez received an assist after Juninho netted the score from long distance.

Juninho is a man of few words, but he's very straightforward when speaking. “I’m very happy to have scored the goal, very important to go up in the table in the standings,” he said.

With 10 minutes left in the game, Beckham scored on a well-placed right-footed free kick from about 40 yards out. His seventh goal sealed the win for the Galaxy. This marks Beckham's fourth score via a set piece.

“I’m not usually scoring that many, but I’ll take it,” Beckham said.

The Galaxy return to the pitch Friday, September 14, when they host the Colorado Rapids in a game that kicks off at 8 p.m.