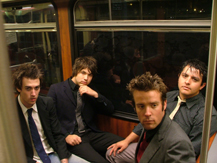 "I am definitely not a math student," proclaims Evan Robinson of the Frantic. "I don’t like anything where there is some so-called right answer to the problem. To me, music is just super free. It’s awesome how whatever you create is correct and at least handfuls of other people will find that correct too. There’s no explanation or logical answer behind anything that we write as a band. It’s just our way of expressing our frantic selves."

The quartet, comprised of Robinson on vocals, Reid Curby on guitar, Abraham Jimenez on bass and Miki Rogulj on drums, met while in high school and while working summer jobs in Fallbrook, Calif. Currently based in Carlsbad, the band has played all over So Cal, amassing fans from LA to San Diego. Although the band has only been together for about a year, music has always been a part of their lives.

Robinson recalls, "My mom was involved in a gospel choir so I would always go to their shows and be moved by that many voices singing and the amount of energy that was being created." Robinson’s dad, a songwriter, would fill the house with his own music as well as "Crosby, Stills, and Nash, Jackson Browne, The Eagles – timeless music like that, but there wasn’t anything that he put a bunch of emphasis on. He just always allowed me my freedom to listen to whatever."

That freedom planted a seed for Robinson to pursue his musical aspirations. He states, "I always felt like I had music in me and wanted to pursue it, but society tells you to go to four-year college, get your degree and work. When I was a sophomore in high school it dawned on me, as much as a doctor wants to go to school for ten years and become a doctor, I wanted to pursue music."

After Robinson formed the Frantic with Curby, recruiting Jimenez and eventually Rogulj, they concentrated on bringing their music to as many people as possible. With songs like the incredibly catchy "Farewell," dance-inducing "Cars We Drive" and beautiful "Because I Love You," the group recently had the jaded patrons of Kibitz Room tapping their feet.

With his classic rock-edge mixed with equal parts soul from going to all of those gospel choir shows and natural born charm, Robinson will grab you. His boozy delivery is sometimes reminiscent of Morrissey, but complimented by Curby’s cool riffs and Jimenez and Rogulj’s solid beats, the band sets themselves apart from the Bravery and any other band you might try to compare them to.

Robinson remarks, "I see a lot of great bands that almost just kind of go through the motions and play the part. A lot of bands are good at doing that and that’s fine, but it’s rare to find a band that’s genuinely passionate about what they’re doing and I honestly feel that we have that. It’s something that you can’t fake. We are who we are and we’re doing what we’re doing. If masses of people like that can appreciate what we’re doing then that’s great, but if not, then no harm done because we’re just being us and doing what we love to do."

The Frantic is currently working on material for a debut album set to be released by Velvet Hammer. Robinson says, "I see us progressing as friends and as songwriters. Just like in any occupation, you want to progress at your trade. I want to make this first great record, follow it up with a second great record and continue to make records and be on the road and play for people until I fall over."