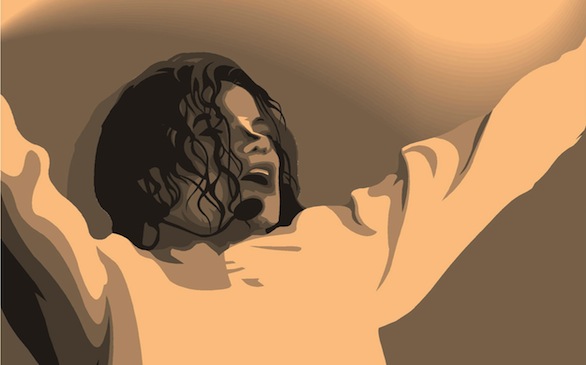 The scene in Michael Jackson's London hotel suite left Randy Phillips in a panic. Phillips was one of the world's most powerful music promoters and used to rock 'n' roll chaos, but the star's condition still floored him.

"MJ is locked in his room drunk and despondent," Phillips said in an e-mail to his boss at Anschutz Entertainment Group, the Los Angeles company staking a fortune on the singer. "I (am) trying to sober him up."

Across the Atlantic, where it was still early morning, AEG President Tim Leiweke read the message and fired back on his BlackBerry: "Are you kidding me?"

"I screamed at him so loud the walls are shaking," Phillips told him. "He is an emotionally paralyzed mess riddled with self loathing and doubt now that it is show time."

The story of Jackson's ill-fated comeback attempt has been told in news reports, a manslaughter trial and a feature-length documentary. But a cache of confidential AEG emails obtained by the Los Angeles Times offers a darker picture of the relationship between the down-on-his-luck idol and the buttoned-up corporation taking a bet on his erratic talents.

The 250 pages of messages illuminate the extent to which top executives were aware of doubts about Jackson's stability as they prepared for his 50-show concert run at their London arena.

The e-mails will probably play a central role in two lawsuits set for trial next year. The shows' insurers are asking a judge to nullify a $17.5-million policy that they say AEG got with false claims about Jackson's health and readiness to perform. Jackson's heirs are pressing a wrongful death suit that accuses AEG of pressuring the pop star to carry on with a comeback despite indications he was too weak.

Lawyers for AEG, which has denied any wrongdoing, said most of the correspondence was produced as discovery in ongoing litigation. They said the messages reviewed by The Times were incomplete and leaked to portray the company in a negative light. The lawyers declined to provide additional emails that they said would give a fuller picture, citing a protective order imposed by a judge in the civil litigation.

"If you are in the creative arts business, you are going to be involved with individuals who have a great many problems," said AEG attorney Marvin Putnam. "Michael Jackson was an adult and ... it is supercilious to say he was unable to take care of his own affairs."

Michael Jackson was a megastar but also had a trail of burned investors and canceled performances that loomed large when AEG began contemplating a deal with him in the fall of 2008.

Even before meeting with Jackson, executives at the highest levels of AEG, including billionaire founder Phil Anschutz, were seeking insurance to protect the company's bottom line if the shows didn't come off, according to the emails.

Anschutz invited Jackson to a meeting at a Las Vegas villa in September 2008. Paul Gongaware, an AEG Live executive who knew Jackson, e-mailed colleagues a strategy memo. Wear casual clothes, he told them, "as MJ is distrustful of people in suits" and expect to talk "fluff" with "Mikey."

The company was proposing a world tour that would net the cash-strapped star $132 million, according to the memo. "This is not a number that MJ will want to hear. He thinks he is so much bigger than that," Gongaware warned. Talk in terms of gross receipts, he suggested.

The singer and AEG signed a deal in January 2009. According to the contract, AEG agreed to bankroll a series of London concerts at its 02 Arena and Jackson promised "a first class performance." If he reneged, AEG would take control of the debt-ridden singer's company and use the income from his music catalogs to recoup its money.

There were doubters inside and outside the company. Dan Beckerman, AEG's chief operating officer, sent Phillips, the chief executive of concert division AEG Live, a YouTube link to Jackson's shaky 2001 MTV appearance and asked, "Can he pull this off?"

"With time and rehearsal," Phillips wrote back.

Pressed by another promoter about Jackson's ability to deliver, Phillips shot back in an e-mail, "He has to or financial disaster awaits."

The contract required a medical examination as part of AEG's effort to get cancellation insurance, and nine days after Jackson signed, a New York doctor went to the star's Holmby Hills mansion. Dr. David Slavit concluded that Jackson was in "excellent condition," an assessment that AEG would tout in the coming months as proof that their star was healthy.

It's unclear how thorough the exam was. Slavit, an ear nose and throat doctor who listed his specialty as "care of the professional voice," wrote extensively about Jackson's vocal cords in his report, which AEG said was given to its insurance broker. But he was silent on Jackson's well-documented substance abuse problems.

The singer had dropped out of at least one tour for drug treatment, but Slavit wrote that past cancellations were "related to dehydration and exhaustion."

Asked on a questionnaire in the report whether he had "ever been treated for or had any indication of excessive use of alcohol or drugs," Jackson circled "no."

AEG planned to announce Jackson's comeback in March with a London press conference. But as the date drew near, Jackson dropped out of sight. Inside AEG, there was growing fear.

"We are holding all the risk," Gongaware wrote to Phillips. "We let Mikey know just what this will cost him in terms of him making money.... We cannot be forced into stopping this, which MJ will try to do because he is lazy and constantly changes his mind to fit his immediate wants."

"He is locked. He has no choice ... he signed a contract," Gongaware wrote.

Jackson made it to London, but according to e-mails Phillips sent to Leiweke, the star was intoxicated and refused to leave his suite. In the end, the e-mails show, Phillips and Jackson's manager had to dress him.

"He is scared to death," Phillips wrote to Leiweke.

In an interview, AEG's attorney Putnam suggested Phillips had exaggerated in his e-mails and said Jackson's behavior appeared to be a case of "nerves."

Jackson arrived 90 minutes late for the news conference and his brief comments struck some of the 350 reporters gathered as disjointed and strange. Still, fan enthusiasm was undeniable: Demand for an initial 10 shows crashed Ticketmaster's servers.

Two months later, Jackson and AEG got insurance from Lloyd's of London, according to the policy that is contained in court records. For rehearsals in L.A., it only covered accidents. The policy would expand to include illness and death coverage when Jackson got to London and was evaluated by Lloyd's doctors there.

AEG officials first met Dr. Conrad Murray during May rehearsals. In the trial last year that ended with Murray manslaughter conviction, witnesses testified that Jackson insisted that AEG hire the doctor as his personal physician for the London shows at $150,000 a month,

Murray, who was deep in debt and in danger of losing his home, was giving Jackson nightly doses of propofol, a powerful surgical anesthetic, for his chronic insomnia, according to the doctor's statement to police.

In an interview, AEG's lawyers noted that none of the e-mails referred to propofol and said no one at the company knew about Murray's use of it. Jackson died before signing Murray's contract, and the doctor was never paid by AEG.

Those rehearsing with Jackson began sounding alarms in mid-June, according to the e-mails, a month before his scheduled debut in London. They complained he missed rehearsals, was slow picking up routines and would have to lip-synch some of his signature numbers.

"MJ is not in shape enough yet to sing this stuff live and dance at the same time," the show's musical director informed supervisors in an e-mail. Jackson missed another week of rehearsals, and when he finally showed up June 19, he was too weak to perform.

"He was a basket case," a production manager wrote. "Doubt is pervasive."

"We have a real problem here," Phillips wrote to Leiweke.

The show's director, Kenny Ortega, told Phillips their star was not ready for the comeback and called for a psychiatric intervention: "There are strong signs of paranoia, anxiety and obsessive-like behavior. I think the very best thing we can do is get a top Psychiatrist in to evaluate him ASAP.

"It is like there are two people there. One (deep inside) trying to hold on to what he was and still can be and not wanting us to quit him, the other in this weakened and troubled state," wrote Ortega, who had known Jackson for 20 years. "I believe we need professional guidance in this matter."

Phillips brushed off the request for immediate psychiatric intervention. "It is critical that neither you, me or anyone around this show become amateur psychiatrists or physicians," Phillips wrote.

He added that Murray, "who I am gaining immense respect for as I get to deal with him more," was confident the singer was ready.

"This doctor is extremely successful (we check everyone out) and does not need this gig so he (is) totally unbiased and ethical," Phillips wrote.

At a meeting that day, Jackson vowed to improve, and Murray said he would help. By all accounts, the next two days of rehearsals - the last of Jackson's life - were superb.

In the recent interview, AEG's lawyer said the company responded responsibly to concerns raised by Ortega and others by monitoring rehearsals and consulting Jackson and his physician.

"Michael and the doctor stressed that he was OK. They had it under control," Putnam said.

Numerous e-mails show that at the same time, Lloyd's of London was pressing AEG to schedule a complete medical examination for Jackson. The insurance company had to be convinced the singer was healthy before they would expand the policy to include illness and death, crucial coverage given reports from rehearsals.

That four-hour exam by Lloyd's in London would include three doctors, heart monitoring and blood work. AEG's insurance broker tried to persuade Lloyd's to drop the physical, according to the e-mail discussions by AEG officials. AEG suggested Murray could provide an oral recitation of Jackson's recent medical history instead. Lloyd's refused.

Since agreeing to the policy in May, Lloyd's had sought additional information from AEG _ medical records, details about Jackson's daily fitness program and responses to press reports about his health.

"Always with no response," a Lloyd's underwriter wrote.

Lloyd's also insisted on five years of medical records. The insurance company wrote that it wanted a thorough account for all doctor's appointments, hospital visits and cosmetic procedures since 2003.

Within AEG, it was determined that Murray was the best hope to get the records, and in the final week of Jackson's life, officials sent at least 10 emails reminding him to gather them.

Murray responded to the last of the requests June 25 in Jackson's darkened bedroom suite, according to emails presented at the doctor's criminal trial. He wrote that he had talked to Jackson and "Authorization was denied,"

Less than an hour later, Jackson stopped breathing, according to the L.A. County coroner's office.

A week later, AEG filed a claim for the entire $17.5-million insurance policy and said publicly that it was out more than $35 million.