Astronomy Star Gets His Due for Discovering the Kuiper Belt 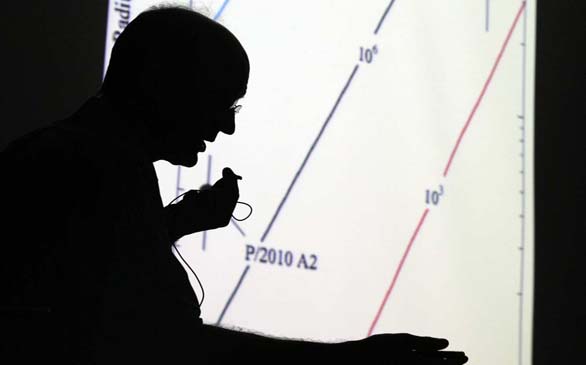 Dressed as usual in jeans and Velcro-secured sneakers, University of California, Los Angeles astronomer David Jewitt sat at his desk recently and feigned concern: What, exactly, does one wear when accepting gold medals from the king of Norway and a Chinese billionaire-philanthropist?

"I'm trying to figure out what a tuxedo is," he said, rolling his eyes. "It's apparently different everywhere."

Fashion isn't familiar territory for Jewitt, 54, an expert on comets and the other small objects zipping through the solar system. But he'll need a proper suit Tuesday when he receives the Kavli Prize in astrophysics in Oslo, and another on Sept. 17 when he picks up the Shaw Prize in astronomy in Hong Kong.

The awards - second in prestige only to the Nobel Prize - are in recognition of Jewitt's discovery of the Kuiper Belt, a doughnut of icy bodies orbiting beyond Neptune. Confirming the belt's existence has revolutionized scientists' view of Earth's neighborhood, leading to Pluto's demotion to dwarf planet and helping astronomers reconstruct the solar system's turbulent early history.

Jewitt stared through telescopes for five years before finding the first recognized Kuiper Belt object, 1992 QB1, a 150-mile wide chunk of ice and dirt. Two decades later, he's excited to get the acclaim - along with his share of the prize money: $833,333. But with just one day to go before departing for the Kavli ceremonies, he still hadn't rented a tux.

Maybe he was too busy writing grant proposals, listening to death metal, prepping for fall courses, walking his daughter home from middle school or pondering the origins of Earth's oceans.

Or maybe he was just being Dave.

Jewitt was born in London to working-class parents. No one in his family had attended college, but they encouraged his fascination with the U.S. space program, giving him his first telescope for his eighth birthday.

In 1979, Jewitt started graduate school at the California Institute of Technology, where he focused on comets and planetary nebulae, the clouds formed by dying sun-like stars. By the time he joined the MIT faculty in 1983, he was searching for what lay beyond Neptune.

The notion that there might be stuff in the outer solar system wasn't new - astronomer Gerard Kuiper suggested in 1951 that small planets or comets might have formed there - but no one had detected anything.

"That seemed weird," Jewitt said. "The inner solar system is full of all these objects. Why would the outer solar system be empty?" Perhaps the objects were just too dim for current technology to detect. He and a graduate student, Jane Luu, started searching.

During an early attempt to spot objects as they passed in front of distant stars, the pair had trouble telling the difference between the shadows cast by birds flying over their telescope and those caused by heavenly bodies.

"We called the Audubon Society and asked, 'What is the surface density of birds?' " Jewitt said. "It got to the point of ridiculousness."

So they began looking for light from objects themselves.

The scientists knew that any bodies beyond the giant planets would be moving across the sky at a rate they could calculate, so they scanned huge glass photographic plates for signs of slow-moving dots of light. After about a year they switched to digital images, but the chips available at the time were too small to spot anything.

In 1988, after moving their project to the University of Hawaii, Jewitt and Luu announced their search so far had come up empty. Funding dried up as well.

"We could have stopped," Jewitt said. "But just when we'd think, 'Oh, forget it, it's hopeless,' the technology would be twice as powerful."

They began looking on the sly, sneaking in searches during their other telescope-based research.

Then, in August 1992, they found a faint dot. It was heading west, at exactly the right speed, against the starry background.

"Its motion was perfect," Jewitt said.

He and Luu tracked 1992 QB1 as long as they could, afraid that if they looked away they would never find it again. Over the next year, they discovered another slow-moving object, and then more. The entire collection came to be known as the Kuiper Belt.

Caltech astronomer Mike Brown, who has spent much of his career discovering Kuiper Belt objects, said Jewitt's success resulted from a combination of creativity and stubbornness.

"Dave just had the hunch ... that something was out there, and he kept going at it," Brown said.

Today there are about 1,500 known Kuiper Belt objects.

"In the end, we stopped recording them because they're so common," Jewitt said. "If I see one now, I just move on."

As Kuiper Belt objects piled up, the importance of the hard-won discovery became apparent: The solar system was not the "boring" place many scientists had thought.

"You can still find new stuff," Jewitt said. "This gives us more information about the formation of the solar system than we ever thought we'd have."

The belt's icy objects have been in perpetual deep-freeze, unchanged since the birth of the planetary system. By studying how much water, carbon dioxide and methane the bodies contain, scientists can better understand the initial composition of the solar system.

Many comets come from the Kuiper Belt, the discovery revealed. Also, the configuration of the belt's objects provided evidence that Jupiter, Saturn, Uranus and Neptune didn't form in the orbits they're in now. "The giant planets are the shipwreck," Brown said, "and the Kuiper Belt is the stuff that washes up on the shore."

Astronomers understood the importance of Jewitt's discovery immediately. But the message took longer to get out to the public, which would get to know the Kuiper Belt during the 2006 debate over whether its most famous object, Pluto, was or wasn't a planet.

That controversy rankled Jewitt, who had considered the question settled for years: "Pluto isn't special," he said. "It's a Kuiper Belt object. It's just the first that was discovered, and it was discovered out of context."

Jewitt has moved on from many of his Kuiper Belt studies. By tweaking his search methods, he and former student Scott Sheppard discovered 46 moons of Jupiter, 25 of Saturn, two of Uranus and one of Neptune.

"He's the kind of person who could study one thing one year and switch to another the next and be successful," said astronomer Chad Trujillo, who worked with Jewitt on the Kuiper Belt search as a graduate student. "Most people will study one thing their entire lives, whether it's still interesting or not."

These days Jewitt is enthralled with so-called main belt comets, "freakish objects" that move like asteroids but look like comets.

In a recent lunchtime session at the Jet Propulsion Laboratory in the Los Angeles area, Jewitt displayed pictures of his obsession, suggesting main belt comets might be the source of Earth's water.

Scientists have shown that the water in comets, once believed to have seeded the oceans, does not have the same mix of hydrogen isotopes as the water on Earth. But the water in main belt comets might. It's a premise Jewitt would like to test by sending a spacecraft to the asteroid belt.

His other current goal is to win a grant from NASA for astrobiology - the search for life beyond Earth - in part because it bridges disparate fields such as astronomy, nanoscience and cell biology. In his opinion, scientists are too specialized.