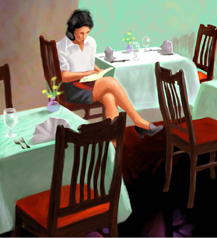 Marriage is in the air – and on our radios, televisions, newspapers, magazines and bakery cake racks. Everywhere you look, the message is as clear as wedding-gift crystal: Get married! Everybody’s doing it!

It’s a directive some singles are tired of hearing.

"Our culture tries to say that unless you’re married, you’re going to be miserable – that marriage is the one way to have a happy and meaningful life," said social psychologist Bella DePaulo, who has studied the topic for the past seven years.

In appearances on television and radio – including interviews on National Public Radio and "The Rush Limbaugh Show" – the visiting University of California at Santa Barbara professor proclaims that this belief is not only false but unhealthy.

"What I’m trying to do in all of my writing and thinking," DePaulo said in a phone interview, "is debunk all of the subtle and not-so-subtle ways that single people are dismissed, marginalized and denigrated."

Her book, Singled Out, is scheduled to be released next year by St. Martin’s Press. In July, DePaulo published a paper in the journal Psychological Inquiry about how social scientists often overlook the stigma against singles.

"Unfair treatment and the stigma really permeate all aspects of society," agrees Thomas Coleman, executive director of Unmarried America, an information service and online library for single and unmarried people. "It’s still expected that people will marry and that there’s something weird about you if you don’t." Socially isn’t the only way singles suffer, Coleman pointed out. Singles endure unfair work policies, tax codes that penalize them, higher auto insurance rates and federal laws that outlaw most forms of discrimination except those based on marital status.

He recalled hearing from a single woman who had a pension plan through her employer, a major airline, and wanted to name her sister as her beneficiary.

"She was told, you can do this," Coleman said, "but you should know that if you die before you retire, [your sister] won’t get a penny." The money would go back to the company.

If a married employee died before retiring, however, the surviving spouse would get the pension.

In another instance, a single woman wanted to use family medical leave laws to take time off work to care for her sister, who was dying of cancer and was her only living relative. Because the law doesn’t apply to siblings, she couldn’t get the time off.

Legal issues aside, it was the social stigma that first drew DePaulo, who is single, to the subject after she noticed she was treated differently than married friends. Women she frequently met with over lunch never asked her to their dinner parties. Was it because they found her dull, she wondered, or was it because she didn’t have a date to bring to their all-couples events?

Curious, she started taking notes about each instance, just to see what the patterns were. Then one day at a party, she began talking to another single person about her observations. Soon, other single partygoers joined the discussion and shared their own stories.

DePaulo decided to start researching the topic in earnest. Among her findings: People often assume that singles are less mature, secure, generous, happy and loving than people in a romantic relationship – especially when compared with married people. Instead, singles are viewed as lonely, envious and selfish.

The stigma is stronger the older the single person is, but she found 20-something single college students also are viewed less-favorably than their coupled peers.

Even divorced people – once the scourge of polite society – fare better than singles. "If you’ve been married and divorced, you’ve shown you’re capable of being loved," DePaulo said. "Instead of saying, `What’s this person’s flaw that makes them unable to hold onto a marriage,’ they’ll say, ‘What’s your flaw that you never got married?’"

"There’s a kind of hierarchy of goodness, worthiness and respect," DePaulo said. "At the top are people who are married, and at the bottom are people who have never been married." Yet even as our culture clings to The Couple, roughly 49 percent of all U.S. households are headed by a single person, said Unmarried America’s Coleman. In California, single households are in the majority.

Despite society’s denigrating assumptions, singles live satisfying lives. One study DePaulo reviewed found that among married and single people, single women are the happiest. Other research suggests that it’s stability – not marital status – that matters. People who remain single or who get and stay married may be happier than those who marry and divorce. Also, contentment can vary dramatically not only across individuals, but also over time. For example, people who get married often feel happier for a year or so afterward, but then return to their pre-marriage level of happiness, DePaulo said. "I think there are legions of single people quietly living lives of happiness," DePaulo said.

Lara Battles of Arroyo Grande, Calif., is one such person. The 50-something divorcee has been single since 1998 and said she has no intention of marrying again – but admits she might feel differently if she’d never been married.

"I have known women who never married who do appear to hunger for marriage, as if it would complete something they feel is lacking," Battles said. "I think it’s cultural conditioning, cultural expectation."

As demographics continue to shift, and as social scientists like DePaulo increasingly research how singles are treated, it’s likely society’s attitudes will finally catch up with reality.

At last, single men – who routinely earn less than their married counterparts – will get a wage raise. And single women won’t feel they need to read books titled If I’m So Wonderful, Why am I Still Single?

"It’s like before the women’s movement," DePaulo explained. "There are all these assumptions made that really derogate singles and demean them, and they haven’t been challenged. Once we challenge them and show them for what they are, they will make no more sense to us than all the dopey things people used to say about women."