Great Adventures in Nature — Without Leaving the Big City 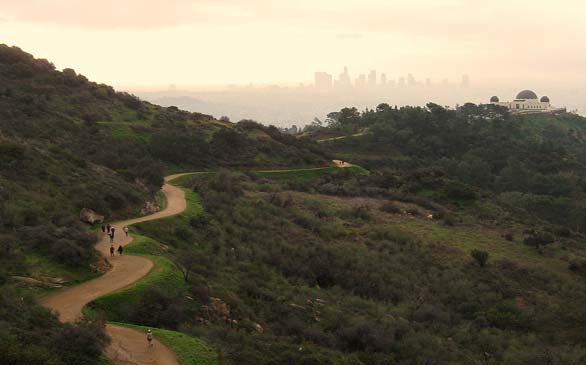 From the fringes of New York to the heart of steamy Singapore, nature is everywhere you're not looking in some of Earth's most notoriously crowded big cities. From river walks to mountain peaks and everything in between, outdoor adventure is often just a few stops on the train - or a short drive - away from the maddening crowds.

Here are a few favorites to get you going:

It's not a skyscraper or a Ferris wheel. It's not the Eiffel Tower and there's no pricey circulating restaurant up top. But if you want an absolutely unforgettable, no-admission-charged, 360-degree view of the entire Los Angeles region - the valleys, the mountains, the Pacific Ocean - it's yours. All you have to do is hike a little. One of the preferred exercise routes for those living on this end of town, the Mount Hollywood Trail is easily accessed from the parking lot of the famous Griffith Observatory; if you thought the views from over there were something, wait until you see what you get at the end of this steep (but fairly easy) 1.5-mile trail, which winds its way through the Griffith Park wilds up to the mountain's 1,640-foot peak (www.outdoorla.org).

If you didn't know just how much the Japanese enjoy spending time in nature, hop a Keio Railways train from Tokyo's busy Shinjuku Station during the month of November and alight 50 minutes later at Takaosanguchi. Can't move for the crowds? Well, it is peak foliage season after all, and the station is at the foot of one of Tokyo's most popular hiking trails, scaling the sacred, 599-foot Takaosan, prized for its Mt. Fuji views up top. Maybe come back on a Monday, or some other month? Whenever you go, you'll likely have at least some company, but half the fun of hiking in Japan is sharing the experience with the locals (www.keio.co.jp/english/local/takao.html).

It may not be on your Top 10 list of things to do when you finally get to the Big Apple, but exploring the almost-secret river that flows through one of New York's most mysterious boroughs is an unforgettable experience. The Bronx River Alliance, a non-profit group that has worked tirelessly to bring the much-abused river back to life, operates cycling and canoeing trips along the river, from the rugged Hunts Point section down near the harbor on up through the borough. Or you can just explore yourself - the stretch running through the New York Botanical Gardens is particularly scenic, flanked by New York City's lone remaining stand of old-growth forest (www.bronxriver.org).

Believe it or not, tightly packed and hopelessly manicured Singapore does have plenty of open space left - there are actual hiking trails right in the middle of everything, if you know where to look. But to really get away from it all, the Southern Islands, a small group of little green dots just off of the city state's southern shoreline, are just the thing. All are accessed via scheduled ferry or chartered boat from the docks behind the glittering Marina Bay Sands complex; just a few miles out and you're a world away from business as usual. Bring a hat, sunscreen, some bottled water and go - from pretty beaches to unkempt tropical forest, there's all sorts of exploring to do. Now is the time, too, as the government ponders various plans to develop the islands. Everything seems to be on hold for now, but don't bet on that lasting forever (www.wildsingapore.com).

This East London river valley was never one of the capital's very famous bits, but that all changed this summer, when anyone near a television got an eyeful of Olympic Park, built smack in the middle of the valley. Inside the park, beautifully landscaped sections along the riverbanks quickly became a favorite relaxation spot for games goers. The park will take some time to be integrated into the valley experience at large, but at present you'll find miles of walking paths worth exploring. Start at the Waltham Cross train station - easily reached from Liverpool Street - and follow the signposted walking route southbound, guiding you past important historic industrial areas, along quiet reservoirs, marshlands and stands of forest, through interesting city neighborhoods like the artsy Hackney Wick area (definitely worth a stop), past - but of course - the western side of Olympic Park and on to the Thames (www.walklondon.co.uk).