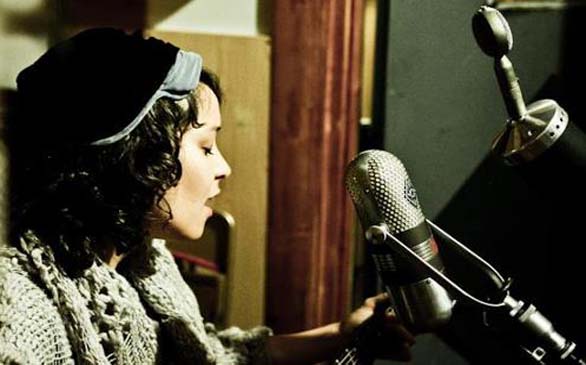 With Postales, we come to witness Gaby Moreno's grand talent as both a singer and songwriter. That's a given - evidently supported by her earlier work - but Moreno's musicianship for creating and adding music to tunes in her latest album is admirable and noteworthy.

The Guatemala-born Moreno, who is 30 years old, lyrically composed eight of the 12 tunes on Postales. Two are pleasant covers of songs from Cuba's Osvaldo Farrés and Mexico's Miguel Luna, while the other two represent a lovely written collaboration from Ricardo Arjona and Jose Maria Bonilla Ruano.

Filled with jazz, blues, and soul, among other music styles, Postales is the type of album that will deliver global acclaim to Moreno. And this is particularly essential to the Latin America spectrum, one that's predominantly targeted with this full Spanish production.

"No Estoy Tan Mal" (I'm Not So Badly), the album's first track, provides an eloquent view to Moreno's distinguished writing while "Tranvía" (Trolley) is a musical escape for the listener - it truly reaches the masterful level of music composition for its adorable storyline and soothing touch instrumentally.

Postales' first single "Ave Que Emigra" (Migrating Bird) can be classified as an emotional and nostalgic piece rooted back to Moreno's native Guatemala and her ongoing pursuit of practicing the profession she has dreamed of since youth: singer. But it also gives us a glimpse of Moreno's open-minded persona since it's up-tempo. Arguably, "Ave Que Emigra" illustrates Moreno's path to stardom.

Another high-energy melody lies in "Valle De Magnolias" (Valley of Magnolias). According to Moreno, this resembles an idea in her mind that continued to progress as she thought of it. Essentially, "Valle De Magnolias" details a happy scene - one that Moreno's distinctive vocals showcase quite brightly. In fact, Moreno's voice throughout the near four-minute set is sporadically pulsating - almost as if she sings with anger. While listening carefully, the passion in Moreno becomes even more prominent.

"Blues De Mar" (Blues of Sea), which Arjona wrote especially for Moreno's Postales, delivers musical depth to the record. Moreno solely formulated music for the song, which is a complete representation of her blues niche. Its benevolence musically makes it an instant classic.

Overall, Postales is Moreno's most astonishing work yet. Whoever didn't know of Moreno will certainly know of her now.

Interestingly enough, Moreno is a rising star and promising singer known for her distinguished flavor of music and a beautiful voice. Nevertheless, with Postales, Moreno cements her name and career as an accomplished star musically. There's no discussion in that. Postales establishes Moreno as a sensational music performer - one not to miss.