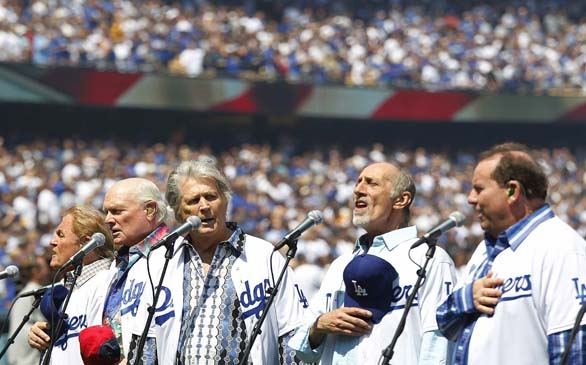 "She gets her kicks in Stepney, not in Knightsbridge anymore."

I was about 11 at a summer camp when I first heard that line from "Play With Fire" by the Rolling Stones. It would be almost two decades before I would actually visit London, but I already knew that a rich girl was playing a dangerous game of slumming by leaving her natural habitat in the upscale part of the city for rougher neighborhoods in search of excitement.

A lot of travelers first visit a place on their car radio, turntable, Walkman or iPod. It's not a phenomenon new to rock 'n' roll - Strauss' "Blue Danube Waltz," Count Basie's version of "April in Paris," and "New York, New York" from the musical "On the Town" all created wanderlust for their subject in listeners far away. In "New York, New York," listeners get a snapshot of the crazy metropolis:

A hell of a town,

The Bronx is up and the Battery's down.

The People ride in a hole in the ground.

But rock 'n' roll has had the biggest impact for the past half century. A hit song can solidify the standing of a famous place: "Graceland" by Paul Simon added to the allure of Elvis Presley's Memphis home. "Heroes" by David Bowie made just going to Berlin and standing by the Wall an end-of-the-Cold War stand for freedom:

Shot above our heads

As though nothing could fall

Was on the other side

Oh we can beat them

For ever and ever

Then we can be Heroes

Just for one day."

Other ties with megahit albums were a bit more tenuous. The U2 album "The Joshua Tree" sent hordes of Europeans scrambling to the desert park, even if its relationship to the album didn't extend much beyond the beautiful album cover photos.

It can also turn obscure spots into pilgrimage sites - witness the crowds who come to the "Crossroads" in Mississippi where blues guitarist Robert Johnson told of selling his soul to the devil (the versions by Eric Clapton have sold millions). Gallup, Winona, Kingman, Barstow and the other lesser towns enumerated in "Route 66." Or the tourism cottage industry that has built up around a dusty wide spot known as "The Corner" in Winslow, Ariz., just because one line in "Take It Easy" by the Eagles caught the imagination of millions of fans.

We Southern Californians have often been the target of this longing, whether it be sweet and fun ("Surfin' USA" and "Surfin' Safari" by the Beach Boys) or decadent and dark ("L.A. Woman" by the Doors and "Hotel California" by the Eagles).

There are Southern California songs embraced by the tourist industry ("I Love L.A.") and those that make fun of it ("Born in East L.A." by Cheech Marin). But what Californian doesn't feel a bit of pride in their choice of home when a radio station cranks up that first line, "All the leaves are brown and the sky is gray," about a miserable Easterner stuck in his frigid town on a "winter's day," plaintively "California Dreamin'."

Even the songs about how California has changed have a kind of wistfulness for lost innocence ("Free Fallin'" by Tom Petty), overdevelopment ("Dry River" by Dave Alvin) or disappointment in Hollywood ("Garden of Allah" by Don Henley).

But no matter how attractive home might be, there is always a longing for someplace else. Growing up in Southern California, I had never been a fan of Bruce Springsteen. Then a reporting job came up that forced me to move to the struggling coal mining town of Wilkes-Barre, Pa., then on to covering the sad, rapid demise of the steel industry in Western Pennsylvania. Suddenly the songs had an emotional connection to my life. I knew many spots like this one in "My Hometown":

They're closing down the textile mill across the railroad tracks

But the songs that had the biggest impact on my wanderlust were British. I knew many places long before I ever got on a plane to Heathrow. Train stations - Waterloo ("Waterloo Sunset" by the Kinks) and Euston ("London" by the Smiths). Albert Hall might be a great Victorian edifice for classical music, but it will always be the spot where they know how many holes it takes to fill ("A Day in the Life" by the Beatles). Brighton was the setting of most of the Who's epic rock opera "Quadrophenia."

The Beatles left a long list of geographic spots in their songs and albums - "Penny Lane" and "Strawberry Fields Forever" in their native Liverpool, and the pedestrian crosswalk near London's Regents Park used on the cover of "Abbey Road."

Pink Floyd was another group that spurred my imagination. Rock fans go to the stately lawn of King's College in Cambridge, which inspired the line "the lunatic is on the grass" in "Brain Damage." More enjoyable for me was seeking out "Grantchester Meadows," from an obscure early Pink Floyd song of the same name. The meadows in Cambridgeshire, basked in a mellow gold afternoon light, were as calming as the song. On the train from Gatwick Airport, travelers see the Battersea Power Station (sans gigantic floating pig) from the cover of Pink Floyd's "Animals."

Not all trips have been so enjoyably evocative. I've wasted an afternoon going to a banal modern arena in Tokyo just to see the site of Cheap Trick's "Live at Budokan." Anyone going to see the Flower Power spots of Haight-Ashbury immortalized in "Are You Going to San Francisco" and other psychedelic songs is going to be faced with a community that went through a harrowing hard-drug era in the aftermath of the hippies and is only now coming out the other side to battle a new enemy - gentrification.

But some spots in songs are wonderfully spot-on once you get there. "Play With Fire" was still in my head when I finally visited London at age 30. I headed for Knightsbridge, where indeed there were rich young women walking around with shopping bags from Harrods and living in $2 million townhouses near Hyde Park. I got on the Underground and headed for dinner in Stepney. The gritty Cockney world of Mick Jagger's time had given way to more of a mix of South Asian spots, but the ramshackle buildings and dark, wet alleys were right out of the song. I didn't stay too long into the night - not wanting to "play with fire."