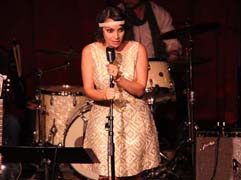 Gaby Moreno is officially at another level, proven by her intimate sold-out concert at Largo at the Coronet Tuesday night in Los Angeles. Moreno delivered an impeccable show - she really did.

The singer-songwriter of Guatemalan descent performed a special showcase that highlighted her latest album release, which is titled Postales - now available. But the night began with a wonderful five-song accompanied by the legendary musician Van Dyke Parks on the piano.

Featured songs included "Across The Borderline," "Nube Gris" (Gray Cloud) and "Historia De Un Amor" (The Story of A Love). Moreno, however, instilled emotional energy with a very touching cover of "The Immigrants" and an amazingly prolific version of "Malagueña." On stage, Moreno and Parks' chemistry is so good that it seems like they've playing together forever.

After a brief intermission, where close friends and fans of Moreno interacted, the 30-year-old beauty appeared again to continue the performance with much delight. "Ave Que Emigra" (Migrating Bird) became her first display, which granted much positive talk after a solid live delivery.

Moreno went on to sing several tracks from Postales, which has released under the Ricardo Arjona-owned music label Metamorfosis. She proceeded with the pleasant "Tranvía" (Trolley), an intriguing "El Sombrerón" (The Big Hat) and a mellow "Nostalgia." Known as the goblin, Moreno's "El Sombrerón" is based off a Guatemalan legend on a fictional character who is a short dude romantically enticing women with long hair. Moreno portrays it beautifully, and "Valle De Magnolias" (Valley of Magnolias) is even an even more beautiful song when sung. It could easily result being the favorite from Postales.

Moreno, who has lived in Los Angeles for over 12 years, also handed "Garrick," "Mess A Good Thing," and "Daydream By Design" - they're from her past work, which carry the jazz, blues and soul vibes. Moreno's musical catalogue is underrated from a universal standpoint. But with Postales, that's certainly about to change.

She then carried on with other new tracks like Arjona's written piece titled "Blues de Mar" (Sea of Blues) and "Luz y Sombra" (Light and Shadow). The noble Moreno finalized her memorable show with a solo of "No Regrets," accompanied by her guitar, and the fabulous "Sing Me Life" - a resplendent piece.

Moreno really went all out on this one.