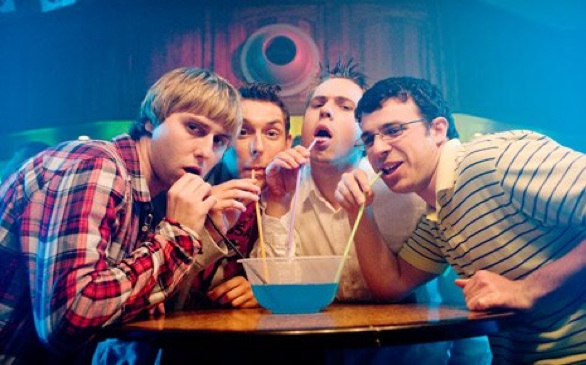 The quirky British import The Inbetweeners, which is a popular television show in Britain, makes it way to the silver-screen. The original television series followed four nerdy friends and their stories of teenage angst. Director Ben Palmer, who also directed the television show, transformed it into a film with writers Iain Morris and Damon Beesley.

The Inbetweeners movie takes us on a journey with nerdy Will, misogynistic Jay, dim-witted Neil and lovesick Simon to the Greek Isle of Crete. The guys are there to enjoy a two week post-graduation getaway for their final hurrah before heading off to “Uni” (aka University) and real life. Simon needs to clear his mind after a disheartening break up with his high school love, while the others hope to consume massive amounts of alcohol and try to get laid. If only it were that easy. When they hit the town, they encounter obstacles along the way and meet a bevy of beauties that they hope to impress. These actions all culminate in an effort to secure the toughest ticket in town: the boat party of the century!

Will, brilliantly played by Simon Bird, narrates the film and lets us see things from his perspective. He has some funny moments as the uptight overachiever who is torn between which pair of khakis to wear out. Simon (Joe Thomas) (who is usually so blind he can’t see a good thing) he meets the adorable Lucy (Tamla Kari) and bores her while talking about his ex-girlfriend, Carli (Emily Head). Neil (Blake Harrison) and Jay (James Buckley) are out to find women both young and old so that they can live up to their monikers of the “Pussy Patrol”. If that title alone offends you, then this film is not for you. The movie is loaded with offensive language.

When getting to know these characters, the film had its charming, heartfelt moments that were then mixed with lots of lewd behavior. Not seeing the English version of the show (which most Americans haven’t) puts the audience at a bit of a disadvantage. There isn’t the connection to the characters that people would have grown to love.

It feels like a mix of American Pie and Eurotrip wrapped up in one film. It uses the common story of teenaged boys coming into adulthood, thus making it lack in originality. The humor is crude and includes jokes about vomit, poop and sex, like many American teen comedies. But the film has that wry English humor and twists that take it a bit further.  It drags a little during the middle of the film where the jokes start to get old and you wonder why these blokes are even friends in the first place.

If this type of movie is your thing, The Inbetweeners is worth a trip to the cinema.