Cole's vs. Philippe's: Who Makes the Better French Dip? 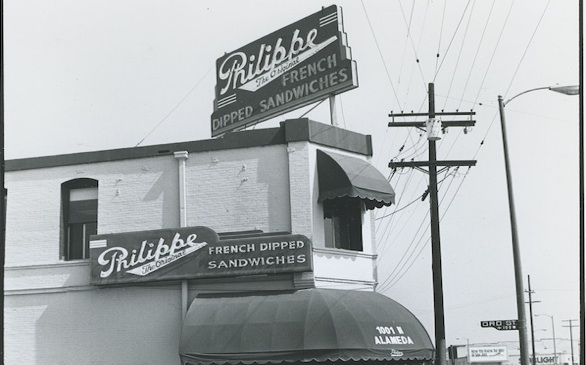 Philippe's claims to be the best french dip place in town.

When it comes to famous Los Angeles rivalries, the first thing that pops up into most people’s heads is the rivalry between USC and UCLA. However, there is a rivalry of a different kind in L.A. that exists between two downtown restaurants: Cole’s and Philippe’s.

At first glance, these restaurants are different in every way. Cole’s is dimly lit with a speakeasy-like atmosphere. Philippe’s is brightly lit and has wood shavings on the floor. Cole’s has a cocktail bar. Philippe’s has wine and beer. Cole’s has a simple menu with a limited number of items, while Philippe’s has an extended menu that even includes breakfast options. Obviously, these locations are very different. Actually, they are so different from each other, it seems there would be no real reason to compare the two. But, because they both claim to be the “originators of the French dip sandwich” with the best tasting French dip in town, an epic rivalry was born.

How did this major sandwich rivalry manifest? It all started in 1908 when both of these establishments were created. Cole’s claims that their house chef, Jack Garlinghouse, created the original French dip in 1908 when he dipped the bread into Au Jus in order to soften it for a customer suffering with bad gums. On the other hand, Philippe’s claims to have originated the French Dip sandwich in 1918, founder Philippe Mathieu accidentally dropped the bread roll into a juice-filled pan that had just been taken out of the oven. According to Philippe’s, the customer told Mathieu that he would eat the sandwich anyway. The next day, that customer returned to Philippe’s with his friends requesting more dipped sandwiches.

Regardless of which restaurant originated the concept, both of them have a lot to offer to the foodies of the world. The Cole’s ambience charms guests upon arrival. The fancy cocktail bar, with countless liqueurs on the shelves behind it, is one of those bars where one can sit for hours, sharing witty banter with the foreign bartender.

Not to mention, other than its French dip Sandwich, Cole’s has some other delicious must-haves like the Spicy Garlic Sweet Potato Fries (bring Altoids) and the Guinness Float. Unlike Cole’s, Philippe’s has a much more casual atmosphere. The place is usually bustling, especially at lunchtime, and the customers sit at picnic tables. Guests stand in lines of organized chaos, waiting for a “Carver” to take the next order. Philippe’s also has other deli classics like pickled eggs, potato salad, and Coleslaw.

Obviously, both of these establishments have a lot to bring to the table. But, when it comes down to a competition between the sandwiches, whose is better? The answer to this question is easy: Philippe’s.

What makes the Philippe’s French dip so divine? Let’s start with the bun. Compared to the Cole’s bun, the Philippe’s bun is much thicker, making it more capable of soaking up the Au Jus. Having the right bun to soak up the juices is a key element for a successful French Dip. When going to Philippe’s, visitors should request that the sandwich be “double-dipped” to soak up all of the mouthwatering flavors. Secondly, the meat used in the Philippe’s sandwich is sliced to a magnificently thin perfection that is difficult for any other sandwiches to outdo. Thirdly, even though Cole’s claims that their sandwich is the “same size sandwich as that other downtown sandwich shoppe,” it is actually slightly smaller than the Philippe’s sandwich.

Overall, the Philippe’s sandwich has a better harmony of flavors, making it the true winner in this face-off. However, for those curious foodies out there, it is fairly easy to try both sandwiches because the restaurants are located near each other. Why not visit both restaurants and make a personal decision on who the real winner is? It is a fun way to spend a free night when one is hungry and looking for something interesting to do.