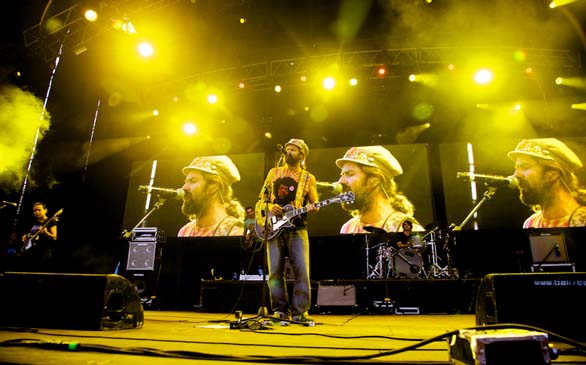 At a gradual basis, Spain’s Latin rock group Jarabedepalo has continued to grow in the U.S., particularly within the large Spanish-speaking cities. Undeniably, it’s an unparalleled music repertoire that’s led to their ongoing global prosperous career.

It’s been a beautiful journey for the act responsible for the lovely melody “Bonito” (Pretty) off their 2003 album Bonito.

Jarabedepalo currently consists of Carmen Niño (bass), Alex Tenas (drums), Jordi Busquets (vocals and guitars), and Riki Frouchtman (guitars). But singer, songwriter and guitarist Pau Donés, who sports unmatchable vocals, is the mastermind behind their past and present projects.

An early fan of the Beatles and Bob Marley, Donés acknowledges that his musical influences come from his kid years. “I have many influences, starting with the discs my mom would play when I was a child,” he says.

“From that point and on, there have been groups and genres influencing me but, at the end, songs have influenced me most. Since then, we’ve created our own music style: rock mestizo.” The term mestizo is utilized throughout Latin American and Spain to classify individuals with mixed heritage.

Donés, like any other musician, found a love in music since youth. Since age 15 while being raised in Barcelona, he and his brother Marc embarked on forming bands of their own in an attempt to secure their future, among other things. But it wasn’t until 1996 when Donés attained respectable recognition after formulating Jarabedepalo’s La Flaca (The Skinny Girl), an album eventually collecting massive sales due to the popular song “La Flaca.”

“From life basically,” Donés says about acquiring inspirations to write tunes. “I believe that’s what inspires all of us in our path. Those experiences, emotions and feelings that I have in my life become songs. Life is the muse of my songs.”

Aiming to not be a one-hit wonder, Donés and Jarabedepalo endured a distinctive music style over the years, which led to eight record productions and more than 10 Latin Grammy nominations.

“We are based in Spain and the Grammy is an American award,” describes Donés, noting that it’s an honor to be nominated. “For us, it is a way to know that people in America follow and know us, and they like our work. It’s an integral part of the group’s reputation in America.”

Their most recent work, ¿Y ahora que hacemos? (And Now What Do We Do?), carries 13 tracks filled with Latin rhythmic underpinnings – just like the others, too – but with rock-pop being prominent.

“It’s the first album genuinely in rock,” Donés confesses. “It has four super luxurious collaborations with the likes of Alejandro Sanz, Joaquin Sabina, Antonio Orozco and Carlos Tarque-McLan. They are rock songs with messages, and it’s opened the door for us in this creative stage that we are in.”

The favorable outcome in Jarabedepalo’s catalogue and image arrives from their music’s originality. In the U.S., this marks why they’ve evolved into a compelling attraction that’s rapidly growing.

Jarabedepalo, meaning stick of syrup, will soon tour the U.S. They’re excited for the opportunity to return to the Los Angeles and share their music with the public.

“Little by little, we keep having more concerts in the U.S,” an admirable Donés says. “We our very thankful with our American fan base for hosting and inviting us. We hope fans join us at the show; it’s been a while since we perform there. They can expect new songs in the set, but also the classics and most known tracks from Jarabedepalo. It’ll be an energetic rock showcase. We’re excited and looking forward to it.”

Jaradepalo performs September 30 at The Troubadour, located at 9081 Santa Monica Blvd. in West Hollywood, at 8 p.m. For more information on Jarabedepalo and tour dates, click here.