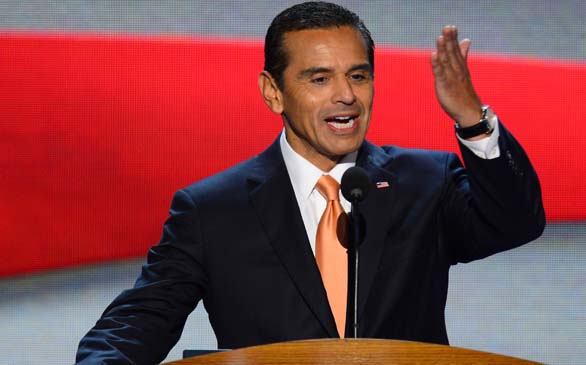 Los Angeles Mayor Antonio Villaraigosa is storming the national stage like never before. He was in Tampa to rebut GOP talking points during the Republican convention last week, appears regularly on Sunday morning talk shows, and has played a key leadership role in this week's Democratic National Convention in Charlotte, N.C.

Written off by some after a much-publicized extramarital affair and a scandal over free sports and concert tickets, Villaraigosa has emerged as a major figure in the Democrats' efforts to get out the crucial Latino vote and is again being talked about as a future governor or senator. He's even coyly danced around questions on CNN about a possible White House bid.

But as his national political star rises, the nagging financial crisis at City Hall could complicate that ascent. Back home, key Villaraigosa allies are warning City Hall is on the verge of going broke. Complaints from neighborhood activists over reduced city services are growing louder.

And public employee unions, a force at the Democrats' convention, are increasingly hostile to Villaraigosa. Some, angry over the mayor's efforts to roll back pension benefits, have likened him to Wisconsin Gov. Scott Walker, a lightning rod of anti-union fervor and a target of Democratic Party ire.

Sherman Oaks Homeowners Association president Richard Close, who voted for Villaraigosa in the last two elections, says Los Angeles is "in decline and without leadership" from the mayor and the City Council. Angelenos would fare better if the mayor, who has 10 months left in office, stayed put and used his skills to confront the city's problems, he said.

"He's running out of time to be the bold leader that he could be," Close said. "And to be a bold leader, you have to be in Los Angeles, not in Tampa."

A spokesman said Villaraigosa's busy schedule did not permit an interview for this story. But in an email, the mayor said he is in constant contact with city department heads and is "fully engaged on the daily issues and the larger topics that face L.A." He defended his time away, arguing that national politics plays a huge role in securing money for housing, public transportation and other critical needs.

Villaraigosa's prominent profile in the November campaign has given him a chance to expound on Medicare, the power of Latino voters, the federal deficit and appealing to what he describes as a "radical center" of the nation's increasingly polarized political system.

He has signaled interest in a run for governor, but carefully avoided specifics, saying that he is looking to finish his mayoral duties on "a high note."

"I love this job," he told the Los Angeles Times. "Virtually every one of my buddies who has gone from mayor to governor said they loved being mayor more."

A former leader of the California state Assembly and one of the country's most recognizable Latino elected leaders, Villaraigosa has long been in the national spotlight. He was on the cover of Newsweek during his first year as mayor. In 2008, he was an aggressive stump speaker for Hillary Clinton's presidential campaign. And in the past year, he's built bridges with other big-city leaders as president of the U.S. Conference of Mayors.

But the contrast between Villaraigosa's dashing national image and the grinding reality of running a city engulfed in crisis has never seemed greater.

Los Angeles has become a case study for how not to manage the proliferation of pot shops. Basic statistics on the performance of the Fire Department in medical emergencies have been deemed unreliable. Budget cuts have forced out thousands of city employees.

Frayed relations with public employee unions could help Villaraigosa appeal to moderates in a run for higher office. But they could also dampen his attractiveness to key Democratic constituencies.