If Dodgers' Billingsley has Surgery, He Could Miss All of 2013 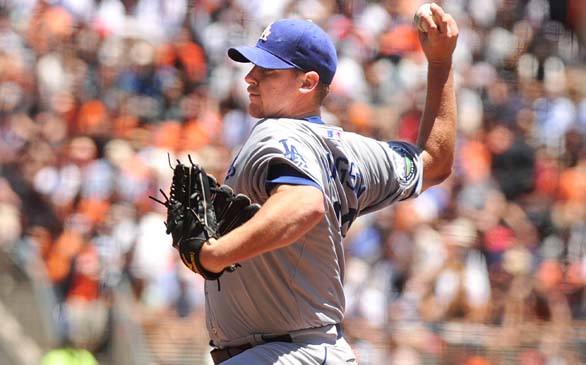 Chad Billingsley could sit out all of the 2013 season if he has to undergo surgery for a torn ligament in his right elbow.

Billingsley will not pitch again this season, no matter how far the Los Angeles Dodgers might advance should they qualify for the postseason. The Dodgers put him on the 60-day disabled list Wednesday.

The Dodgers first will try a rehabilitation program, allowing the right-hander four to six weeks of rest and treatment before he resumes throwing. Billingsley said he has a slightly torn ulnar collateral ligament, which often requires Tommy John surgery.

"It makes you cringe a little bit," Billingsley said, "but they say I have a chance to heal from it before I have to worry about getting cut."

Sue Falsone, the Dodgers' athletic trainer, said the team wants to try rehabilitation first because 10 percent to 20 percent of pitchers do not regain their effectiveness after Tommy John surgery. She acknowledged that most pitchers with a partial ligament tear proceed directly to the surgery because of its success rate.

However, since this is the end of the season, she said the Dodgers could afford to allow Billingsley several months to try to recover without surgery. If Billingsley were to have surgery, the rehabilitation period would be about one year, so he would sit out all of next season whether the operation were next week or next spring.

Billingsley has received two injections of platelet-rich plasma and could receive a third, Falsone said. She said that treatment is too new to have reliable statistics on its effectiveness in resolving a partially torn elbow ligament.

The Dodgers called up left-handed reliever Steven Rodriguez, making him the first player from this year's draft to reach the major leagues. Rodriguez, selected in the second round from the University of Florida, had an 0.92 ERA in 19 2/3 innings, split between Class-A Great Lakes and double-A Chattanooga (Tenn.).

Three months after taking finals in college, Rodriguez was sharing a clubhouse with Matt Kemp and Adrian Gonzalez.

"You see them all the time on TV," Rodriguez said. "It's great I could be a part of this and try to help out as much as I can.

"Yesterday, I couldn't even speak. I don't know how to put this into words right now. I've got to get over it eventually."

Lilly pitched a simulated game, a step toward possible activation as a situational left-handed reliever. Lilly, who has not started since May 23 because of shoulder and back injuries, has not appeared as a reliever since Aug. 5, 2003.