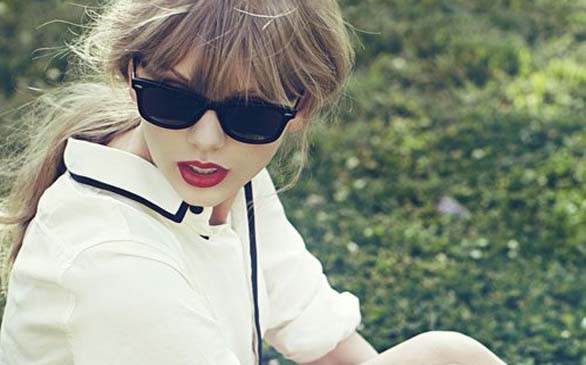 Taylor Swift was nominated for the Country Music Assn.'s top honor as entertainer of the year.
(Credit: Facebook/Taylor Swift)

Taylor Swift, Kenny Chesney, Brad Paisley, Blake Shelton and Jason Aldean were nominated Wednesday for the Country Music Assn.'s top honor as entertainer of the year, an award to be handed out Nov. 1 at the 46th CMA Awards ceremony in Nashville.

But relative newcomer Eric Church, who received his first nomination last year, scored the most nominations this year with five, largely for his musical homage to rock star Bruce Springsteen: his song "Springsteen" is up for single, song and video of the year. His third CD, Chief, also is nominated for album of the year, and he's up for male vocalist along with Shelton, Aldean, Keith Urban and Luke Bryan.

"I really don't know what to say," Church, 35, said Wednesday. "I'm still a little bit in shock. I think it's a testament to fans who believe in the music, who love the music and told people about the music, because we don't have the track record to be the most-nominated artist. ... I think it's truly because of the fans, because they did something that is going to be judged as pretty unique and pretty special."

Church's song isn't the only nomination tied to figures from outside country music. Rapper Snoop Lion (aka Snoop Dogg) snagged a musical event nomination for his guest appearance on Willie Nelson's "Roll Me Up and Smoke Me When I Die" along with Kris Kristofferson and Jamey Johnson. And 1970s and '80s R&B-pop kingpin Lionel Richie is up for consideration in the same category, with former Hootie & the Blowfish singer Darius Rucker, for their remake of Richie's hit "Stuck on You."

Chesney has taken the entertainer of the year trophy four times previously, tying him with Garth Brooks for the most wins in the category since the awards began in 1967. Swift has collected it twice and Paisley once; Aldean and Shelton are hoping to make it their first. Swift was the youngest performer ever to win the award when she nabbed it in 2009, at age 19.

The female vocalist nominees are Carrie Underwood, Swift, Lambert, Kelly Clarkson and Martina McBride. Underwood once again will co-host the ceremony with Paisley.

In the running for song of the year are "Over You," written by Lambert and Shelton; Bentley's hit "Home," written with Dan Wilson and Brett Beavers; "God Gave Me You," sung by Shelton and written by Dave Barnes; Church's "Springsteen," written with Ryan Tyndell and Jeff Hyde; and Will Hoge's "Even If It Breaks Your Heart," which he wrote with Eric Paslay.

Album of the year nominees along with Church's Chief are Lambert's Four the Record; Bryan's Tailgates and Tanlines; Lady Antebellum's Own the Night; and Bentley's Home.

Contenders in the vocal group category are Lady Antebellum, which has taken the award three years running; Little Big Town; the Zac Brown Band; the Eli Young Band; and the Band Perry.