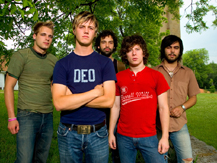 Will Pugh loves golf, University of Georgia football, the Beach Boys, Jeff Buckley and Dr. Pepper. He doesn’t drink or do drugs and his parents are retired in Florida where they have their own golf cart. Oh yeah, he’s also the singer for up-and-coming power pop-punk band Cartel.

Chances are you haven’t heard of Cartel yet, unless you happen to be really up to date on your soon-to-be very trendy pop-rock bands. However, with the release of their full-length album Chroma, Pugh and his fellow band mates are going to be making some changes and hanging out in your collective radios and CD players for some time.

Having just finished their fall tour with Acceptance, Pugh – along with guitarists Nic Hudson and Joseph Pepper, bassist Ryan Roberts and drummer Kevin Sanders – welcomed the different atmosphere of touring with a major label band.

"It was the biggest tour we’ve done so far so it was great to have consistent audiences every night, not being worried about whether anyone’s going to show up," says Pugh.

Hailing from Atlanta, Cartel already fought an uphill battle just to break out of its local scene. "Atlanta is one of the hardest cities to play as a local band and to come out of," he says. "Everyone lives outside of the city. Getting the kids to come downtown when their parents are frightened they’re going to get mugged is a difficult task."

Once the hard part of getting people to come to the shows is over, Cartel can let its brand of upbeat rock speak for itself. "It’s pop-rock for sure," says Pugh of his band’s style, but don’t take that as room to group them with any of their so-called pop brethren. "I think it’s definitely got a lot more influence from classic rock than bands in our genre. Joseph doesn’t play Green Day style leads. He’s always pulling some kind of Jimmy Page thing on us when we play."

That said, Pugh still has no qualms about falling under the pop umbrella, in fact, he wears the label like a badge of honor, citing some of his biggest influences as the pop bands of yesteryear. "People forget that the Beach Boys were a pop band and the Beatles were a pop band," he says. "People often have too current of a misconception of what pop is."

Though the years have passed and definition of what the genre means has since drastically mutated, Cartel just may be the band to remind kids that pop existed long before Simple Plan, Good Charlotte and angst-ridden lyrics.

"A lot of bands have trite lyrics about suicide or anything like that, and they always want to touch on an issue," he adds of his distaste for forced poignancy in music. "I’ve had a wonderful life so far … not that there isn’t personal meaning behind the lyrics, but it’s kind of everything behind rose-colored glasses."

With the current state of music and everything else in the world that influences it, Cartel just may be what everyone needs. As Pugh says, "Music’s not always supposed to make you question government or politics or religion or anything like that. It’s ok to have songs that make you feel good."