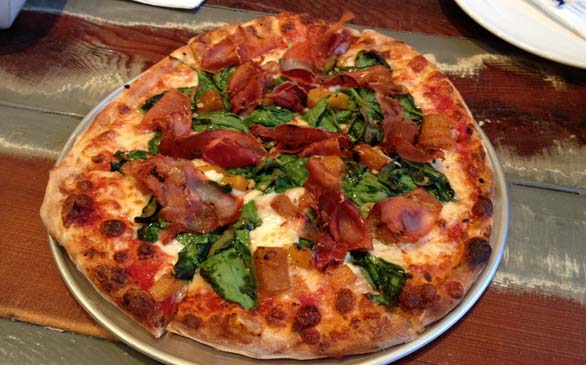 The Roast Pumpkin & Prosciutto pizza is the perfect combination of sweet and salty.
(Credit: Nicki Spencer)

People who live in New Zealand have many opportunities to take big risks. Around every corner, there is yet another opportunity to go bungee jumping, skydiving, extreme downhill mountain biking, kite surfing and pretty much every other activity that most Americans plan to do… someday. However, for Adam Borich, the New Zealander who founded L.A.’s Lucifers pizza, selling his house, moving across the globe and entering the restaurant business is probably the biggest risk he’ll ever take. And that’s saying a lot considering he is also an extreme downhill mountain biker.

Many people already know about the Lucifers pizza located in Los Feliz on Hillhurst Avenue, which is often packed with hungry hipsters who are sick of leftover Thai food and looking for a different way to spice up the night. However, many people are yet to be aware that another Lucifers pizza location has just been opened on Melrose and La Brea, avenue, and it packs just as much heat as the original.

One of the key details that makes Lucifers such a success is the restaurant’s focus on spice. With a name like Lucifers, it’s safe to expect a great deal of heat on the menu, and Lucifers does not disappoint. With four different spice levels to choose from (zero, medium, fiery, or blazing), customers can order a personal of full-size pizza to the perfect degree of spiciness suited for their personal tastes. However, be careful with the blazing level; it’s only for those who can really handle the heat. Continuing with the heat and fire motif, there are also many pizzas on the menu that already have spicy ingredients on them such as the Ringburner, which includes pepperoni, jalapenos, black pepper, bell pepper and hot chili sauce. It might not be the best idea to add too much spice to an already fiery pizza; but adding spice to a dish like the Prosciutto-Pollo pizza helps to heighten the flavors.

Before discussing the pizza in more detail, the appetizers must have their shining moment of glory. With openers such as flame-baked chicken wings, garlic bread and baked sweet potato fries, it is hard to say no to the appetizers at Lucifers. Especially when they are sinfully tasty, like the sweet potato fries. As if those were not mouthwatering enough, Lucifers pairs them with a side of honey. The combination is so sweet and delicious that it feels as if you are eating dessert first, which is something Lucifer himself would completely condone.

After indulging on an appetizer, customers then get to eat some pretty tasty pizza. Though Lucifers has classics like its Simple Cheese, Margherita, Meat Lover and Veggie pizzas, do not make the mistake of thinking this is an average place for a slice. In designing the menu, Borich included many exceptional dishes like the Roast Pumpkin & Prosciutto pizza that has pumpkin, prosciutto, roast garlic, basil and spinach. For this unusual pizza, the slight sweetness of the pumpkin complements the saltiness of the crispy prosciutto.

Putting pumpkin on a pizza sounds pretty risky, but as stated earlier, Borich is familiar with risk. When asked how he designed such an eclectic menu he said, “I’ve always looked at pizza crust as a plate and the rest of the toppings as the meal.” This perspective on pizza-making opens new possibilities of what can serve as a topping for a pizza and has allowed Borich to create bold recipes like the Thai Satay Chicken pizza, which includes red onion, sun-dried roma tomato, green bell pepper, green onion, shredded chicken, noodles and Thai peanut sauce.

Overall, the new Lucifers location is quaint, inviting, and it has outdoor seating. With its antique-style picnic tables (handmade by Borich… talk about a Renaissance man), its friendly staff and its delicious pizza, it’s a great spot to grab a bite with friends. However, if you are having a sweatpants day, then the new location is also a nice place to order delivery or takeout. Any way you want to slice it, the new Lucifers on Melrose Avenue is a fantastic and fiery addition to L.A.’s restaurant scene.

Lucifers is located at 7123 Melrose Ave. in Los Angeles.