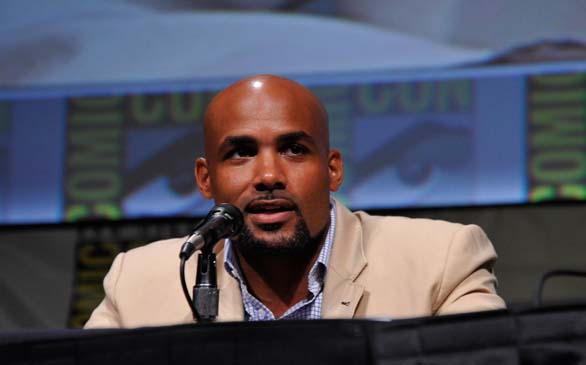 The Resident Evil: Retribution star actor Boris Kodjoe opened up about his past, his family and his career. What follows is an exclusive Campus Circle interview with Kodjoe.

Campus Circle: Hi, Boris. How are you?

CC: Glad to hear it.  Just recently, I saw that you were born in Austria and grew up in Germany. Can you tell us what it was like to grow up in another country?

BK: It was great! You know, it was all I ever knew.

BK: I came here on a tennis scholarship when I was 19.

CC: How were you introduced to acting? Was it something that just happened naturally?

BK: You know, I was a tennis player all my life, and that’s what I wanted to do. I was a top player, but I got injured. So, that sort of derailed my plans. I was pretty down and depressed about what happened, but my mother wanted to take my mind off of it. So, she suggested that I come back to the U.S., because I had all these scholarship offers. She wanted me to go to college, and realize that there was more to life than just tennis. So, that’s what I did.

I started studying at VCU [Virginia Commonwealth University] in Richmond, and I made some great friends. I got my degree. Then, by accident, I fell into modeling. I traveled the world, and I did that for quite a while.  During that time, I really wanted to lose my accent, because I couldn’t really speak English that well. So, I went to acting class to help me lose my accent. While I was trying to lose my accent in acting class, I just fell in love with it. It was a great way for me to express myself. When you first start acting in class, it’s very therapeutic. I was also working very hard at speaking English properly, because I knew that no one would buy me speaking with a German accent.

CC: That’s quite the success story!

BK: Well, they have a mutual respect, but there’s an emotional undertone there, definitely. They like each other. They respect each other tremendously.  When you go through a traumatic experience together like they have, I think it sort of bonds you together. We’ll have to see what happens, but I definitely share your perspective on that.

CC: What was the biggest difference for you between shooting in 3D and shooting a regular film?

BK: There’s really no difference. The set-ups take longer, and [when doing stunts] you have to be immaculate with your technique. For instance, if you miss the chin by too much, it shows. So, there’s a lot of rehearsal. We trained for six weeks before shooting. It was a lot of fun doing that! You get to kick ass with a bunch of hot chicks and kill zombies. You can’t get much better than that.

CC: In Resident Evil: Retribution, there is a scene where your character, along with several others, is chased through Red Square by a huge “Licker”. Was it difficult for you, as an actor, to react to a monster that wasn’t there?

BK: It’s tough, but we end up cracking up halfway through shooting it. (laughs) Paul [Anderson], the director is standing there, shouting at us. “Okay, the “Licker” is here!  Move to the left, there’s someone shooting at you!”  So, he just keeps yelling at us, and we have to react.  After awhile, it just becomes complete chaos.

CC: Now that you’ve seen the completed film, what do you think of Resident Evil: Retribution?

BK: It looks great. I mean, the fight scenes are just unbelievable. There’s some stuff you’ve never seen before. Milla really kicks ass. The zombies have mutated, and they’re much more intelligent now. [Retribution] really takes it to the next level.

CC: Do your children get to watch the Resident Evil movies?

BK: Absolutely not! (laughs) They would be traumatized. They have no idea that their father is a zombie killer.

CC: So, they don’t know that their dad is an action hero?

BK: Actually, a couple of days ago, I was replying to some fan mail. I left a picture of me that I signed where I was holding a gun on the kitchen table. They freaked out.

CC: Would you say it’s difficult to juggle your family life and your career?

BK: No, I don’t think so. Family comes first. My wife and my kids are the most important things in my life. They are my focal point.  Everything else just falls into place automatically. My wife has an amazing career.  She just got off of Broadway - she did “A Streetcar Named Desire”. She’s also shooting a TV show and going to London to be in “A Streetcar Named Desire” on the West End.

CC: If you could use one phrase to describe Resident Evil: Retribution, what would it be?

CC: What projects do you have coming up, now that you’ve finished Resident Evil: Retribution?

BK: I’m shooting a thriller in November. Then, in the Spring, I’ll be directing my first movie.  It’s called Looking for Jimmy Lee. It’s a romantic comedy starring my wife, and I’m very excited about that. It’ll be my first time behind the camera, and I can’t wait.