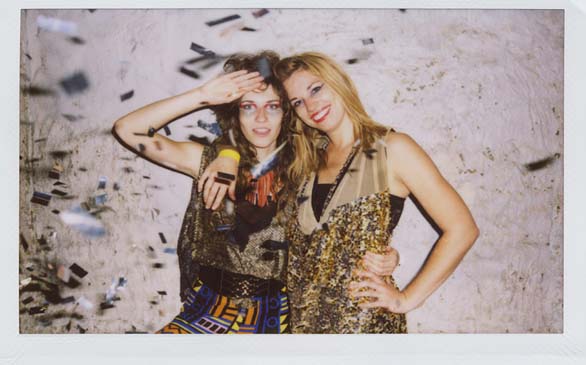 Sisters Taraka and Nimai Larson have lived in ashrams, worked for utopian architects, written manifestos, delivered lectures from pools of fake blood and conducted group exorcisms. Now the siblings, known musically as Prince Rama, have launched a dance contest in conjunction with their new single, “So Destroyed.” To enter you’ll need to submit a video on YouTube of yourself dancing to the song employing your “most destroyed” dance moves. Prince Rama will compile the best entries into an official music video for “So Destroyed,” and the grand prize winner will receive custom made Prince Rama dance shoes designed by the band, a signed album and a chance to perform the dance live on stage with the band. Submit the link to your YouTube clip to sodestroyed@paw-tracks.com by September 24.

You might say that the recording of the new Dollyrots album was a little hairy. After releasing its last two efforts on Joan Jett’s Blackheart imprint, the L.A.-based duo decided to go D.I.Y. for its upcoming self-titled release. That meant a search for funding, which the band secured through a Kickstarter campaign. In order to offer fans something in return for their donation, singer Kelly Ogden and guitarist Luis Cabezas came up with the idea to give a gift of something they had plenty of -- locks of their hair. You can now view a video for the album’s lead single, “Hyperactive,” at artistdirect.com. The full album The Dollyrots drops on September 18.

SOMETHING FROM NOTHING: THE ART OF RAP

The Ice-T directed hip-hop documentary, Something from Nothing: The Art of Rap, began its theatrical run a couple of months ago. Now Legacy Recordings has released the film’s star-studded soundtrack. The 23-track CD contains contributions from Public Enemy, Afrika Bambaataa, Rob Base & DJ EZ Rock, KRS-One, RUN-DMC, Q-Tip, Big Daddy Kane, Nas, the Wu-Tang Clan and many others. Some of the inclusions, like N.W.A.’s “Straight Outta Compton,” have been circulating forever, but the set also includes rare cuts like live, acapella rhymes from Melle Mel, Immortal Technique, Grandmaster Caz, Lord Jamar and Ras Kass.

Sunnyside Records has just released a compilation album that benefits victims of the 2011 Japanese earthquake and tsunami. Home: Gift of Music – Japan Earthquake and Tsunami Relief features jazz vocalists, including Claudia Acuña who covers Abbey Lincoln’s “The Music is the Magic.” But all the other tunes, sung by the likes of John Ellis, Alan Hampton, Becca Stevens, Leron Thomas, Sachal Vasandani and Doug Wamble, are originals. “Action is how we show that we love and we care,” says the compilation’s producer, Rio Sakairi. “Action is the only way to combat helplessness. I took on this task because Japan is my home. I hope that these songs will bring some comfort and light in your dark moments and help you reconnect with your own humanity.” All proceeds from the album will be donated to Habitat for Humanity Japan.

He was born in Italy and raised in Switzerland, but Valente is a California resident now; his just-released E.P. Alexandria is available for streaming now at MSN’s listening booth. L.A.-based synth-pop band Shiny Toy Guns has announced an October 22 release date for new album III, and they’ll play a record release show at the Echoplex the following evening. The Return to Psycho, California is the name of the new release from Hotel Diablo, and it’s due to drop on September 25. The band says the title is a reference to the “darker side” of Hollywood. Mediaskare Records has just released The Slow Rhythms of a Dead-Beat, the latest from L.A. hardcore act, Deserters.