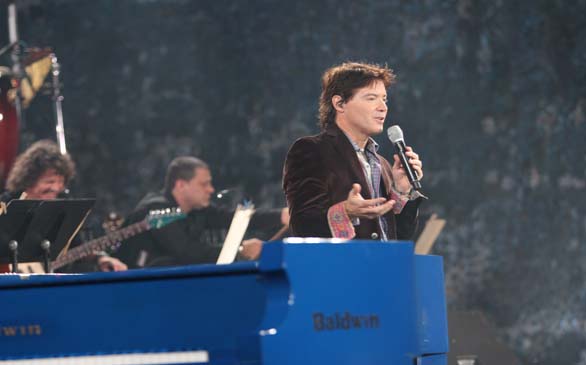 Arthur Hanlon keeps doing it. After a three-year hiatus from formulating an album, Hanlon is now back better than ever before. The acclaimed pianist, arranger and songwriter has fulfilled many of his dreams throughout his impeccable career.

Hanlon has done just that this year in his most recent work, Encanto del Caribe (Caribbean Fantasy), which is a live CD/DVD project recorded in Puerto Rico featuring a compelling list of guest appearances and contagious tunes. Over 40 musicians joined Hanlon on stage at historical Castillo San Cristóbal. Laura Pausini, Natalia Jiménez, Marc Anthony, Cheo Feliciano, Bernie Williams and Ana Isabelle are now a part of history, as they each joined the Detroit-born piano master.

“The opportunity came up with different people, different entities. The question was where to do it,” Hanlon says.

Hanlon, who is Irish-American, mentioned that multiple locations were considered for this spectacular concept. Turns out that the Caribbean was just perfect. Built in 1973, Castillo San Cristóbal is a magical and an ideal location for Hanlon’s musical achievement.

“We checked out Castillo San Cristóbal. We walked into the place, and it was amazing,” Hanlon proudly says. “It’s a castle with dungeons underneath and I was even imagining the conquistadores, lovers, affairs, fights, blood and all the drama.”

The castle is a National U.S. monument, so getting permission to film within it was no easy task, particularly because no one had ever filmed there before. After a successful campaign with the full intention of receiving an approval from both the U.S. and Puerto Rico government, a permit came through.

Hanlon, who never envisioned himself doing anything other than music, and company made their case of the project not only being a Hanlon CD/DVD, but also one for the Caribbean while celebrating its delightful music and history.

At this point, Hanlon’s dream was half way there, to say the least. Gathering all the musicians, singers and dancers proved to be difficult, but not impossible. Hanlon’s friends – acclaimed music acts – were ready. So was he.

A phenomenal singing sensation from Spain, Jiménez collaborated with Hanlon on “Historia De Un Amor” (A Love Story). The combination produced a vibrant scene, given Jiménez’s pleasant vocals, Hanlon’s smooth touch on the piano, and an astonishing orchestra in the background.

“Amazing,” says Hanlon when asked about the experience on stage with Jiménez. “She really likes that song. We made this really cool arrangement that starts off funky and ends with a salsa-tumbao. She did a great job.”

Anthony could not be left out of this record and evening. Four years ago, Hanlon met Anthony at the Latin Grammy’s. Since then, there have been that desire to work together. So they did it.

That’s the result of “En Mi Viejo San Juan” (In My Old San Juan), which is considered Puerto Rico’s anthem. It sparked so much emotion that Hanlon still remembers it vividly.

“That was one of the most powerful moments of the show,” Hanlon confesses, adding that he was fighting tears. “It was an emotional moment. Everyone was standing up, dancing, singing along and crying. It was a magical moment.”

The CD/DVD also carries “Prendo Te” (I Take You) with renowned Italian singer Pausini, “El Ratón” (The Mouse) along side salsa singer Cheo Feliciano and former baseball player Bernie Williams on the guitar, and a lovely tribute to the Colombian city of Cartagena in “Cartagena.”

Encanto del Caribe celebrates the history of Puerto Rico and the Caribbean, featuring a distinctive evening of live music directed for a television special. Public television stations continue to broadcast the unique performance. More airings are planned through October, and it’s deserving of that.

“As a pianist and composer, for a long time I really wanted to film a TV special along with some friends; it was my dream,” says Hanlon, who is already planning a tour.

Hanlon’s dream is now a reality. And Encanto del Caribe is simply a musical masterpiece.