The Vandals: Tickling Your Ears with
Hollywood Potato Chip 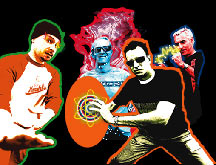 Composer Gershon Kingsley once said about the relationship between music and humor, "You cannot be a great artist without humor being a part of your personality. You have to have a certain distance from yourself, and humor can provide that." Kingsley should listen to The Vandals.

Orange County punk legends The Vandals have proven that humor is a winning component in music and entertainment, and that embracing the lighter side of life does not mean sacrificing musical integrity, let alone punk intensity. The band — singer Dave Quackenbush, bassist Joe Escalante, guitarist Warren Fitzgerald and drummer Josh Freese — defines Southern California punk in the spirit of doing what they want, when they want, and laughing all the way to the beach with a Budweiser in hand.

The Vandals released their 12th studio album, Hollywood Potato Chip, June 29 on Kung Fu Records, the Los Angeles-based label co-owned by Escalante and Fitzgerald and one of the most successful indie labels around. Hollywood Potato Chip is a brash yet comical tribute to the Hollywood machine that feeds on the naivete of newcomers, devouring their ambitious dreams of stardom and leaving them standing on the littered curb in front of the casting studio, confused and broke.

Campus Circle met up with Escalante and Fitzgerald on the Vans Warped Tour to talk about music and showbiz.

Campus Circle: Your music is often discussed in terms of its inherent humor. Where do you see humor functioning in art and entertainment and where do you see The Vandals existing within that?

Fitzgerald: Art is anything you call art. As soon as you put a frame around it, it’s art, and that can be tying your shoes, it doesn’t matter.

Entertainment is celebrity. It doesn’t mean you have to do anything well, or do anything at all to be famous or to be on "Entertainment Tonight." [I see our band] in the "Seinfeld" category — on a good day, best case scenario. A sense of humor is what separates us from the animals … those moronic dolphins!

Escalante: Our songs are really hard to play musically (laughs). But there is message in our songs, even though they sound silly.

Do you feel that, when it comes to the "punk" genre, too many bands get overly concerned with sending a message? Sometimes it seems that bands let their so-called "message" suffocate their music.

Fitzgerald: A lot of our songs musically will sound like they’re very angry or specific or political, but then you actually read the lyrics and it’s about a vending machine that didn’t give you your change back or something.

Escalante: What we’re trying to do is entertain people, right now. There are some messages in our songs, but with the live show, why burden people with this message? Let’s have fun. And then if you want to get into the message, buy the record. And when you’re ready to look into a message, you’ll find it.

Lets talk about your Totally International Talent Search (T.I.T.S) which coincides with the release of your new record, Hollywood Potato Chip. The contest requires fans to send in videos of themselves performing a song off the album, where the "best-of" will be posted on your Web site. How do you see this in relation to my previous question, about the relationship between humor, art and entertainment?

Fitzgerald: The thing is, human beings are capable of having the delusion that they’re capable of things that they’re not. Sometimes that’s called showbiz ambition. People only recently, through reality television and many other things, have discovered that’s really important. And if you’ve got a dream, however shitty your dream is, or however misguided or delusional it is, you’ve still got it. And that’s fascinating.

But showbiz creeps me out. I like music, I like entertainment, I like art, but I’d rather have a waiter whose goal in life is to be a waiter, the best waiter possible, instead of a waiter who is an unemployed actor with a script under his arm.