Dedicated to Fruitcups: Canter’s Deli Man a Cut Above 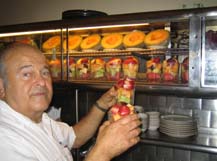 It is one man’s fruit cup, and time and time again, my son has told me about the man – the pride he takes in it, the precision, his obsession. He has been making it for 45, close to 50 years; two, sometimes three times a day.

My son says he compliments him, acknowledges his devotion, enjoys the fruits of it – a pristine, un-syruped fruit cup, fresh and clean.

So the first breakfast of my visit to Los Angeles will be on the faded block of Jewish businesses in the Fairfax section, at Canter’s Deli, which faded itself to a bleary, 1950s seashore-pink.

It’s open 24 hours, 363 days a year (closing on Rosh Hashana and Yom Kippur), still making its own pickles and catering in its Kibitz Room Bar and vinyl booths to the occasional break-out band or Hollywood star: Marilyn Monroe and Arthur Miller were habitues.

For us, though, there will be no Billy Gray’s Band Box Special (open-faced chopped liver and egg salad) or lox, eggs and onions. We must order, my son insists, the fruit cup – California sunshine in this Brooklyn-esque bog of brisket and kishka and sandwiches featuring, in one $12.50 offering, high-piled hot corned beef and pastrami. He guides me into the dining room entrance, not the main deli door flanked by cases of cured meats and take-out, high-piled pastries and glossy cakes.

By going in the dining room entrance, you pass instead ranks of trays crowded with nectarines and plums, strawberries and honeydews set out to ripen.

This is part of the system of the man who makes the fruit cup: The deli business is busy, he says, but there are down times. So if he gets bored, he takes his wagon up and down Fairfax Avenue, sometimes to the old farmers market, picking up what looks good that day. "This guy might have good green plums. Another guy, good mangoes."

The ripening, he says, is key.

His name is Alan Canter, which my son had never realized, he is 69, and he’s the patriarch of the deli his family founded in Jersey City, N.J., in the 1920s. It moved to East Los Angeles and, in 1953, to its latest address, 419 N. Fairfax Ave., the site of the old Esquire Theater.

The younger generation runs it now: Alan Canter specializes in fruit cups, close to 100 a day.

In the early ‘60s, as Canter recalls, "a guy sent me 20 cases of Crenshaw melons, but the skin was all wrinkled and shriveled." He couldn’t sell the melon by the wedge, so he sliced it up and put it on a plate. But the Crenshaw has a bland, watered-down pallor: "They wouldn’t buy it."

He added a blush of watermelon. Then golden pineapple. Want to really move them?, a counterman asked: Put a strawberry on top.

Soon they were selling, all right. So many they were driving Alan Canter to distraction. One day he made 116, his counter so crowded with plates that in a light-bulb moment he realized that switching from horizontal to vertical would save a bunch of acreage.

He grabbed one of his glass tumblers. And in that instant his fruit plates were reborn: They became fruit cups.