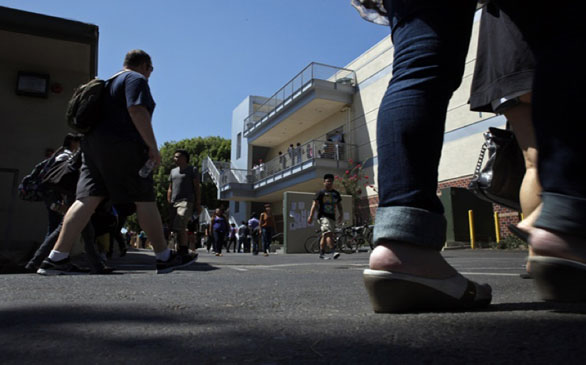 The governing board of California's community colleges on Monday approved historic, system-wide registration policies that favor students who have a specific education plan and have completed orientation and assessment tests.

Registration priority also will be given to continuing students in good academic standing who have not exceeded 100 units. The changes, first recommended this year by a statewide Student Success Task Force, are intended to make it easier for students to reach their educational goals, whether they are seeking a degree or to transfer to a four-year university.

The move also marks an unprecedented narrowing of the mission of community colleges, which have had to drastically reduce class offerings in recent years because of severe budget cuts.

"In the past, community colleges have been able to serve everyone and students could accrue a large number of units or do poorly in all of their courses and still receive priority registration," said Chancellor Jack Scott, who is retiring this week after overseeing many of the reform efforts. "Now that colleges have had to cut back on the courses they can offer, those students were taking up seats in classrooms and crowding out newer students focused on job training, degree attainment or transfer."

The new requirements were unanimously approved by the Board of Governors, which was meeting at San Diego City College. They take effect in fall 2014. The system's 112 campuses will make a big push to educate current students about the new rules, and to give those on academic probation a chance to improve their grades and those nearing the unit cap to plan their remaining course schedules, officials said.

The system's 72 locally administered districts will be required to establish an appeals process for students who lose registration priority for unforeseen reasons.

Among all groups, active duty military, veterans and former foster youth as well as low-income and disabled students will continue to have first preference for classes.

Most of the measures have been endorsed by academic and student organizations, but some critics argue they will hamper low-income and disadvantaged students, especially those unfamiliar with college.

"Some students will struggle for any number of reasons, but having said that we are at a point in time where we don't have as many resources as we used to and we've got to place some criteria around registration," Himelstein said. "This will place priority on students who are motivated and showing good progress above those who in some cases quite frankly are meandering through the system."