UCLA's Brett Hundley Gets It 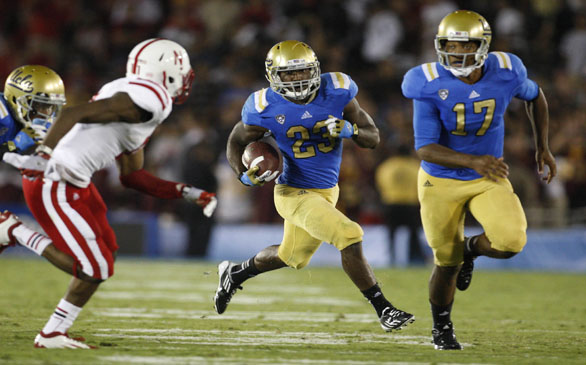 Quick, who is the last African American to lead the UCLA football team in passing?

"I have absolutely no idea," Brett Hundley says.

Jackie Robinson, I tell him.

Hundley's eyes widen, he shakes his head, and his deep voice rattles.

The kid gets it. The Bruins' redshirt freshman quarterback is carrying plenty on his broad shoulder pads, yet we can believe he will hold up, because the kid gets it.

You watch him lead UCLA to two victories in his first two collegiate games with 628 total yards and seven touchdowns, and you know he understands what's happening on a field that seems too small for him. He knows he has a chance to be the first great Bruins quarterback in 15 years, and he embraces it.

"I can't even tell you how it feels, to know God has happily blessed me with ability to play lights out ... to ball out ... to have fun," he says with a giant smile. "When you realize you fit in with this game, it's amazing."

He also understands his role in a journey of perhaps equal importance, his opportunity to be the first African American to spend an entire year as the Bruins starting quarterback while becoming its first black leading passer since Robinson threw for 444 yards as a running back in 1940. Football is still sadly emerging from a time dominated by the unspoken belief that African Americans lacked the mental capacity to play quarterback. While Carolina's Cam Newton and Washington's Robert Griffin III are grabbing the recent headlines, there still has been only one winning black quarterback in 46 Super Bowls.

"It's cool to have the chance to spread the light," Hundley says. "I want to represent my school and my race in the best way possible."

It's cool to have the chance to spread the light. Hundley believes that because he remembers his moments of darkness. They would occur when strangers, upon hearing he was a football player, never thought he was a quarterback. It not only happened in high school, but also on the UCLA campus last year when he redshirted as a freshman.

"Race always been a big issue for me in this area, because people see a tall black guy who can run and the first thing they think is that he's a receiver," says the 6-foot-3 Hundley. "Nobody ever thought I was a quarterback. I was always, always a receiver. I won't lie, it would make me really mad."

His father, Brett Sr., said the racial profiling occurred from the moment his son began playing flag football as a tot in suburban Phoenix.

"His whole life growing up, people were trying to get me to switch him to another position, because nobody thought he would get the chance as a quarterback," his father says in a phone interview. "But playing quarterback was his dream, and I wasn't going to keep him from his dream."

When was the stereotyping finally shattered? Hmm, maybe after he took the snap and ran 72 yards for a touchdown on his first collegiate play against Rice? Or maybe it was when he threw four touchdown passes with no interceptions against Nebraska.

He's only 19, but he's already a brainy, brawny leader with the humility of a starting center. When he was given the starting job this fall, he was so appreciative that in the middle of the meeting room, surrounded by his fellow quarterbacks, he broke down and cried. When he phoned his parents in the Phoenix area with the good news, he asked if he could fly home to his church for a prayer service of thanks.

His schedule wouldn't allow him to leave town, so his father set up a conference call in middle of the church. With Brett listening on speakerphone, the congregation prayed.

"I wanted them to pray for humility and health," says Brett, who suffered an ankle injury against Nebraska but should be fine this weekend against Houston. "I know this can all be gone in an instant."

You can see his priorities in the pendant he wears around his neck, a tiny and shiny inscription of the Lord's Prayer. You can also see them in his 223-pound frame, free of tattoos even though his two sisters both have ink.

"I know it's a little weird, I know it's different from what everybody is doing now, even my sisters," he says with a chuckle. "But I'm like, when you get older, what are your tattoos going to mean? What's the point of it? I never got it."

I could see that humility in the 15 minutes before our Tuesday afternoon interview. Hundley texted the school's publicity department three times during those 15 minutes to apologize for not being early and to alert me of his progress.

"He knows everything he is representing there," said his father. "He doesn't want to mess anything up."

Hundley say he is representing not only his school and his race, but his sister, Paris, who suffers from epilepsy attacks that have led them to the hospital more than 100 times.

"I play for her," he says. "I play because her seizures stopped her from running track, and she was faster than anything. Sometimes I think she can live vicariously through me."

As Hundley carries the hopes of so many through a season whose promise is suddenly so great, she won't be the only one.