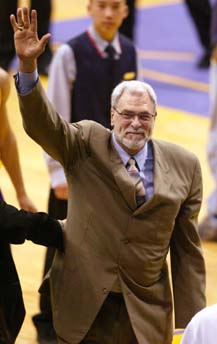 Untitled Document Phil Jackson sits in the midday sun outside a restaurant, absently twirling a string of jade and vermilion beads around his neck, stones signifying energy, health and luck.

Ah, luck. It has Phil Jackson’s face on it, and he knows it. Everyone who has experienced success has gotten a good bounce somewhere, a fortunate call. Not that Jackson didn’t have something to do with those nine NBA championships as coach of the Bulls and Lakers, the certain Hall of Fame status, the $10 million or so a year he’s now making to coach the Lakers. But he, too, can wonder.

"In reality, I was an assistant coach of the Chicago Bulls ready to take the Minnesota Timberwolves expansion team if the opportunity came in 1988," Jackson recalls. "The Knicks did not happen, the Bucks. The Bulls did happen. Maybe I was placed in that situation by fate. My whole, established reputation has been based on those chances.

"Like Michael Jordan, do I have to be an MVP, win a championship or does it tarnish what happened before? No, I don’t feel that at all. Realistically, this is a situation to try to help develop this team and bring some stability to this organization and reclaim some of the past community feeling this team always has had.

"We’re going to take our lumps. People are going to get kicks out of having an opportunity to have a little bit of fun with this team. It’s not something I’m going to enjoy all the time. It’s like going to the dentist to take a loss and feeling the brunt of that effect. But it’s something I’m willing to put up with because I understand where this team has to go to get better."

And so begins a journey that few, including Jackson, believed he would take.

This week, with the opening of the NBA season, Jackson starts his second tour coaching the Lakers and Kobe Bryant. Jackson had labeled Bryant uncoachable, among other things, in a tell-all diary about what Jackson believed would be his final season in coaching, an excellent inside basketball book called The Last Season.

It chronicled the end of the Lakers’ mini-dynasty with Bryant, Shaquille O’Neal and Jackson’s departure in what appeared to be a power struggle he lost with Bryant. Jackson had always promised himself that he’d turn elsewhere at 60, and he reached that age in September. He left the country to ride motorcycles and surf, the endless summer of a highly celebrated life.

But it was the undertow of fulfillment – and some regret – that washed him back onto the rocky shoals of this NBA season, a season during which Jackson takes over a remade team coming off a 34-win season, with only Bryant left from the starters he coached two seasons ago and with an average age lower than that of his youngest children.

Certainly, Jeanie Buss, the Lakers’ executive and Jackson’s girlfriend, was the catalyst for Jackson’s return. As soon as Rudy Tomjanovich resigned as coach, she was urging Jackson in e-mails and phone calls to return.

Jackson said he didn’t want to be another Billy Martin. He wondered about his health, and his legacy as well.

"I didn’t see many teams last year with coaching opportunities [for me] that realistically were contenders," Jackson says. "I thought, ‘I don’t have to come back and do this.’ Being a contender is the end game of this business. But is that the reputation I need to have?

"One, for me, is about a purpose in life. Having fulfillment for what you do and making it work. The other thing [about coming back] was I felt it was kind of unfair, and perhaps I heaped fire upon the situation with Kobe. I felt this guy ... got a bum rap for [the Lakers] trading Shaq."

Indeed, Jackson’s incendiary tales singed Bryant, though Jackson points out they did reconcile enough to be in the NBA Finals with a chance to win a championship again.

"I weighed in on it with the owner and said, in my estimation, [trading O’Neal] was not a good decision, which is why I didn’t take the [personnel and consulting] job with them," Jackson says.

"I felt they had to look at it another year. You never get back what you have in a big man in my history of watching the NBA. And then Kobe gets blamed for all this. This was not Kobe’s fault. Kobe was a free agent. The Lakers made a decision about whether to keep him or not keep him. They felt maybe it was best to trade Shaq then and re-sign Kobe.

"He took the brunt of it. All the fallout from the year before and the variety of things with his very public [sexual-assault] case and situation. The thing is, of all the guys I’ve coached, he’s not a partaker. He’s really one of those guys about business and trying to reach that echelon of greatness the league holds out to him. Kobe is a great player. He has a great attitude toward the game and is a determined competitor. He deserves a chance to come clean from this situation and move on in his career. He’s only 27 years old. I felt if I came back I could help set that record straight."

And so this time, they need one another, Bryant to be able to just play and Jackson to again coach a player of Jordanesque abilities.

"I can’t [fill] the gap Shaq left by his departure," Jackson says. "Coaches don’t win in this league; players do. What I can do is try to make the best of the talent we have, which is what coaching is all about."

But, sadly for Jackson, there’s not that much talent. The starting lineup looks as if it will include castoffs Smush Parker, Kwame Brown and Chris Mihm. Jackson has been employing an aggressive, full-court defense in exhibition games reminiscent of the so-called Dobermans on his Bulls teams. But with the Lakers they look more like Dalmatians, other than Bryant.

"I hear people in the street yell, ‘Bring us back a championship.’ But we realize in this organization it’s realistically going to take a couple of years," Jackson says.

"This team has to grow a lot to even be competitive enough to consider themselves a challenging team."

The curious symmetry, as Jackson tries to use his 1988-89 Bulls as an example, is how closely Bryant fits into the Jordan role (as he’s about the same age) with similar skills and desire. Bryant could well lead the league in scoring, and Jackson says his greatest challenge will be to keep Bryant from overrunning the rest of the team, as Jackson did with Jordan.

It’s a stretch to envision the laconic Lamar Odom in the Scottie Pippen role, though Odom is a better scorer, and Brown has a long way to go to match Horace Grant’s aggressive defense and rebounding. The bench is weak and lacks a 7-footer.

Still, Jackson is smiling. He says he told owner Jerry Buss he’d coach a year at a time for health reasons, though he feels energized now and passed all his tests.

The Lakers added staff to ease his load, and Jackson uses the afternoons now to bicycle on the beach near his oceanfront home. And, he adds with a smile, the money isn’t bad.

"I see similarities [to the old Bulls], which is one of the selling points I have," Jackson says. "I’m not sure it can work yet. But this is a good group, and I’m willing to bet on their work ethic and desire to do things right."