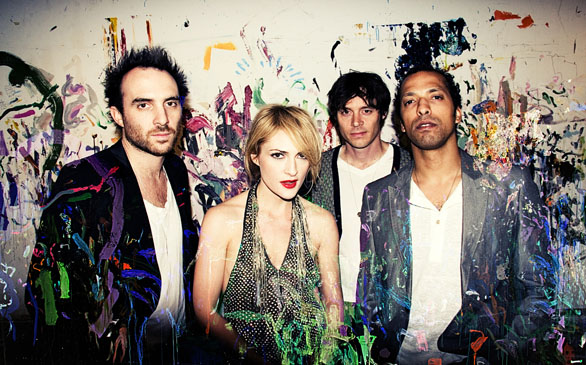 When Emily Haines and James Shaw of Metric visited Minnesota Public Radio for an on-air session in June, they shared two pleasant surprises.

One was a story about Haines meeting Lou Reed, who guests on their band's new record. She figured the Velvet Underground legend wouldn't know her from Adam (or Feist), but he proceeded to paraphrase a line from Metric's 2009 hit "Gimme Sympathy."

"Which would you rather be, Emily: a Beatle or a Stone?" he reportedly asked.

The other revelation was just how good Metric's songs sounded without all the layers of synthesizers and electronic effects that have defined the Toronto quartet's five albums and helped make them one of the most successful truly indie bands of recent years.

Haines and Shaw even delivered the title track of their new album, Synthetica, without synths - just acoustic guitar - and it worked beautifully.

"It had this whole other Dylan sort of vibe," Haines said afterward. "It's so interesting to see how the moods of songs can change like that."

A subversive blend of snarling, Blondie-ish rock, light and futuristic synth-pop and modern-world-weary lyrics, Synthetica is their first record since Metric became much more than just a band Pitchfork readers know. The previous album, "Fantasies," far outsold all its three predecessors put together.

Haines and her three bandmates then wound up recording the theme for a little movie called "Twilight Saga: Eclipse" and won multiple Juno Awards (Canada's Grammys).

Here's more of what Haines had to say during a phone conversation last month from a retreat in northern Ontario. She'd gone there for her first day off after a summer of touring - only to get stuck with an interview, which she cheerfully accepted:

Q. You guys all live in different cities and recorded this record in Toronto and New York. How do you make that work?

A. It's not that big a deal. We all just show up when we need to work. The four of us have very independent lives from each other, but we all remain great friends. I'm always shocked to see so many bands who were never friends, or they were but aren't anymore. They get out on the road together and don't ever talk. I find that so sad and so different, because I love these guys.

Q. Fantasies was the first record Metric put out on its own label. How did its commercial success change things?

A. It was a bit of a "Thank God!" moment, actually. We felt relief, because it's not easy to keep a band up and running. There was a lot of risk involved in us putting out the record ourselves in the U.S. So with Synthetica, it really kind of put us in a comfortable place, where we felt like all we really needed to do was just get down to making a great record.

Q. Are the lyrics in "Youth Without Youth" drawn from your own youth?

A. It comes from an awareness of how different my version of rebellion is from how I see kids rebel now. The options that are available - things are scarier. Where once there was a hash joint, there's now a meth lab. But that's really a lot more blunt than how I wrote it in the song. It started as a sort of dirge on acoustic guitar, and it was just a portrait of a kid that expanded over the course of a year working on it.

Q. How easily did the Lou Reed collaboration on "The Wanderlust" come? As the Killers' song with him showed, he's sort of a hard guy to incorporate into someone else's sound.

A. It felt natural, probably because he and I had a chance to work on some other stuff together. We did a concert in Central Park honoring Shel Silverstein. We did the song "20 Minutes to Go" together, which I only knew from Johnny Cash. You can see the clip of it on YouTube. It's hilarious, because I'm playing piano and his straight man, and he's just ripping on Mayor Bloomberg and doing all this fun riffing.

The chorus (of "The Wanderlust") was always meant to be a call-and-answer, but it sounded weird as a call-and-answer to myself, and if we had the rest of the guys in the band it'd be like "West Side Story." So I called him and he said yes. Originally I thought he would just sing to this part that I had already recorded, and he said, "No, I don't want to sing with a dead, digital Emily." So we went in and did it together facing each other.

Q. We know Lou liked "Gimme Sympathy." Have you ever heard a reaction to it from a living Beatle or Stone?

A. No, I wish! We actually played with the Stones at Madison Square Garden. It was a two-night stand, and we were the only support, which was great. But that was not a situation where we were like, you know, rolling with the Stones. They did the compulsory photo with us, and Keith said something about me looking good (laughs), and that was it.

Q. How did you wind up working on "Cosmopolis"?

A. When Howard Shore asked us to write the theme to the "Twilight" movie with him, we always hoped that would mean we could do something more substantial in the future. So when we got the call it was like, "Yes! A Cronenberg movie." We were able to work in our own studio, and Howard would send us stuff. He still works mostly with pencil and paper, which was interesting. He would send us scores, and we would perform them, and we would send him some ideas we had, and he would integrate them.

I just went to the premiere in New York, and yeah, it was a nice thrill to have Cronenberg shake your hand and say, "Job well done." Robert (Pattinson), Howard and I had a funny conversation about the fact that the two movie projects we've been involved in both starred Robert. So I'm part of the six degrees of Robert Pattinson.