The Five-Year Engagement, “Bored to Death’s” third season and The Ghosts of the Abyss 3D 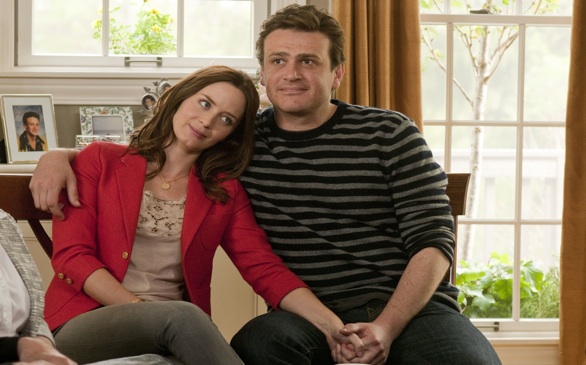 The Majors: Kristen Stewart is the fairest of them all in Snow White and the Huntsman, an epic reimagining of the fairy tale. The Evil Queen (Charlize Theron) dispatches the Huntsman (Chris Hemsworth) to kill Snow White, but the would-be assassin instead trains his target in battle in order to wage war for the fate of the kingdom. It’s a visual feast.

Funny Business: Actor-writer Jason Segel and director Nicholas Stoller (Forgetting Sarah Marshall) re-team for the hilarious comedy The Five-Year Engagement. Segel stars alongside Emily Blunt as a couple who wants to get married, but just can’t make it happen as fate conspires against them. The gut-busting Chris Pratt, Alison Brie and Mindy Kaling co-star.

Inspired by the best-selling parenting guide, What to Expect When You’re Expecting puts a star-studded cast through the ringer of new parenthood. From raging hormones to a dad’s support group, if you didn’t laugh, you’d go insane. Cameron Diaz, Jennifer Lopez, Chris Rock and Dennis Quaid star.

The Idiotbox: “30 Rock” continues to be one of the funniest shows on TV thanks to chemistry between Tina Fey and Alec Baldwin and an unflinchingly absurd sensibility. Season six finds perpetual train wreck Tracy (Tracy Morgan) leading a protest group of self-described idiots for equal rights. Also included are both performances of the live episode.

TV’s most unlikely detective (Jason Schwartzman) returns with his most important case yet in “Bored to Death:” Season 3. Taking time from his stalled writing career, Jonathan Ames becomes a Craigslist P.I. Now, with the help of his magazine editor mentor (Ted Danson) and comic book artist friend (Zach Galifianakis), Ames is out to discover the truth about his biological father (guest star Stacy Keach). It’s the most unassumingly enjoyable show on TV.

Jonathan Nolan (co-writer of The Dark Knight) teams with super producer J.J. Abrams for the high-tech thriller “Person of Interest:” Season 1. An ex-CIA agent is recruited by a reclusive billionaire computer genius who taps into the government’s anti-terrorist surveillance system in order to predict crimes before they happen. It’s a detective show for the post-Patriot Act world.

An update on The Manchurian Candidate, “Homeland:” Season 1 is one of the best new dramas on TV. An obsessed CIA agent (Claire Danes) is hell-bent on proving a recently rescued POW (Damian Lewis) is an al-Qaida sleeper agent planning the next terrorist attack on the U.S. The shell-shocked hero may be a terrorist puppet and not even realize it himself.

Cinemax makes its primetime drama debut with a bang in “Strike Back:” Season 1. This action-packed, globetrotting series follows a disgraced former Delta Force operative as he teams with an elite British anti-terrorism unit tracking a terrorist who is planning a massive attack with a cache of WMDs.

Blu Notes: Two James Cameron classics are more beautiful than ever in 3D. One of cinema’s greatest spectacles, Titanic is a big-scope tragic love story with gorgeous period detail and stunning special effects.

Ghosts of the Abyss 3D features Cameron, Bill Paxton and a team of experts as they plunge into the depths in a sub, capturing the Titanic remains in haunting detail.

Gear up for Halloween with the stop-motion classic, Mad Monster Party. The creators of perennial TV favorites “Rudolph, the Red-Nosed Reindeer” and “Frosty, the Snowman” assemble a rogue’s gallery of monsters, from Dracula to Mr. Hyde, for the retirement bash of Baron von Frankenstein (Boris Karloff).

Then check out the cult classic adaptation of the H.P. Lovecraft story Re-Animator. Back from the dead experiments go horribly wrong in an over-the-top, totally inventive gore fest that you just have to love.