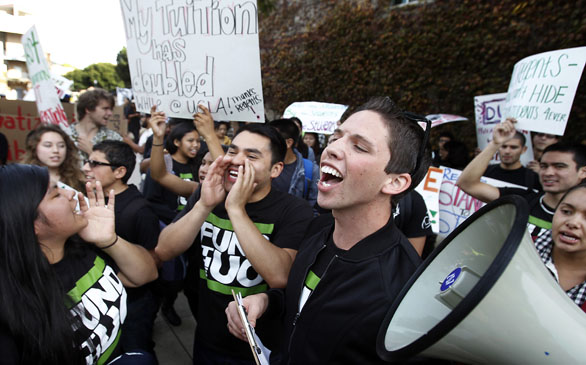 In what was described as a brainstorming session, University of California regents on Wednesday raised the possibility of controversial policy changes - including varying tuition rates by campus and sharply hiking the number of out-of-state students - to cut costs and raise revenues.

Those ideas and others could gain traction if voters reject the tax increase measure backed by California Gov. Jerry Brown on the November ballot.

UC officials also repeated their warning that if Proposition 30 is defeated, UC will lose $375 million in funding and students probably will face a midyear tuition hike, possibly as much as 20 percent or about $2,400. If the proposition passes, there will be no tuition hike for the 2012-13 school year although a modest one is likely the following year.

Regents insisted that they were not trying to scare voters into supporting the tax proposition but that they needed to study some of those options even if the measure passes. No votes were taken Wednesday and no policy changes were adopted immediately. Still, the meeting provided insight into the thinking of many of the regents who control the 10-campus system.

"We are simply examining every possibility," said Sherry Lansing, regents chairwoman. "No ideas are off the table."

Some proposals were considered easy sells, such as fine-tuning investment strategies for UC's endowments and consolidating lab and highly specialized medical functions at its hospitals.

But others generated debate, particularly the one about boosting out-of-state students. UC in recent years has enrolled more undergraduates from other states and countries; those students now comprise about 8 percent of undergraduates across the system although the University of California, Los Angeles and the University of California, Berkeley enroll much higher numbers. On the table Wednesday was a proposal to raise the systemwide cap from the current 10 percent to 15 percent or 20 percent.

Regent Eddie Island slammed the idea, saying it would weaken public and legislative support for UC and abandon the university's fundamental task. "Our mission is to educate Californians," he said.

Island described the out-of-state students, who are charged $23,000 in extra tuition each year, as "low hanging fruit" who are easy to gather. Yet he warned that "this is poisonous fruit."

Student Regent Jonathan Stein said he was concerned that out-of-staters are less racially diverse than Californians and that adding more of them would reduce the proportions of minorities on campus.

However, several regents said that cuts in state funding were forcing UC to enroll more out-of-staters and emphasized that the number of California freshmen has not been reduced. They also said students from elsewhere make campus life more interesting.

"If they come from New Jersey or Florida or Wyoming, that's good for us. If they help to pay for this great, unique university, then I'm for it," Regent Norman Pattiz said.

Some concepts discussed Wednesday were first raised and rejected in 2010 by the UC Commission on the Future. For example, critics said that allowing campuses to charge different tuitions would threaten UC's unity and hurt the reputations of lower-cost campuses. Charging varying rates by academic majors might frighten away students from higher-priced degrees such as engineering, no matter the financial aid provided, they said.

Nathan Brostrom, UC's executive vice president for business operations, said he was not advocating differential tuition, by campus or major, now. Some other state systems use it but, unlike UC, those tend to have a single strong flagship campus and then much academically weaker schools, he said.

Regent Russell Gould, however, said he wanted to consider it further, with efforts to provide low-income students enough aid.

Among other proposals discussed: holding more classes on weekends and in the summer; boosting online education and allowing students to take other colleges' online courses for UC credit; leasing parking facilities to private operators and hiking parking fees; hiring more professors to focus on teaching rather than research.

Lansing sought more study about eliminating duplication among some academic departments across the UC system. She questioned whether it made sense to maintain film studies departments on different campuses or whether it would be better to keep one at UCLA, near Hollywood. She conceded that the idea was "radical" but that financial problems may push UC to the point where "all campuses can't be all things to everybody."

UC Riverside Chancellor Timothy White, however, said such specialization could hurt students whose families either can't afford to send them to campuses far from home or who don't want them to move away.

UC system President Mark G. Yudof said it would take many different measures to ensure UC's academic quality and access to students in the future. "There are no simple solutions," he said. "There are only difficult, complex ones."